Manufacturing remains in contraction in Eurozone

Today we had a few positive developments on the geopolitical front, quite the opposite of what we saw yesterday. Yesterday, geopolitics hurt the market sentiment thus keeping stock markets subdued during the European session. Today, Pakistan decided to release the captured Indian pilot and Donald Trump tweeted a while ago that the relationship with Kim Jong Un is very good. We still don’t know how this issue will end, but it’s a positive sign for the time being and that’s what the market is concerned about right now. Here’s his tweet:

As a result, the safe havens are getting beaten up as USD/JPY climbs 70 pips while GOLD losses nearly $10 from top to bottom. Stock markets have made a bullish reversal and they are resuming the uptrend which started two months ago. Risk currencies have also moved higher in the last few hours with commodity Dollars leading the way, but that is also due in part to the Caixin manufacturing PMI from China which beat expectations early in the Asian session, although it still remains below the 50 level.

Speaking of manufacturing, this sector remains in contraction in the Eurozone with Spanish manufacturing falling below the 50 level as well in February, joining the Italians and Germans on that front. Besides that, core inflation ticked lower to 1.0% in the Eurozone. Headline inflation ticked higher, but core inflation is more important since it removes the volatile energy prices. The ECB is betting that sustainable inflation will pick up but core CPI, which is as sustainable as it gets, is moving lower. 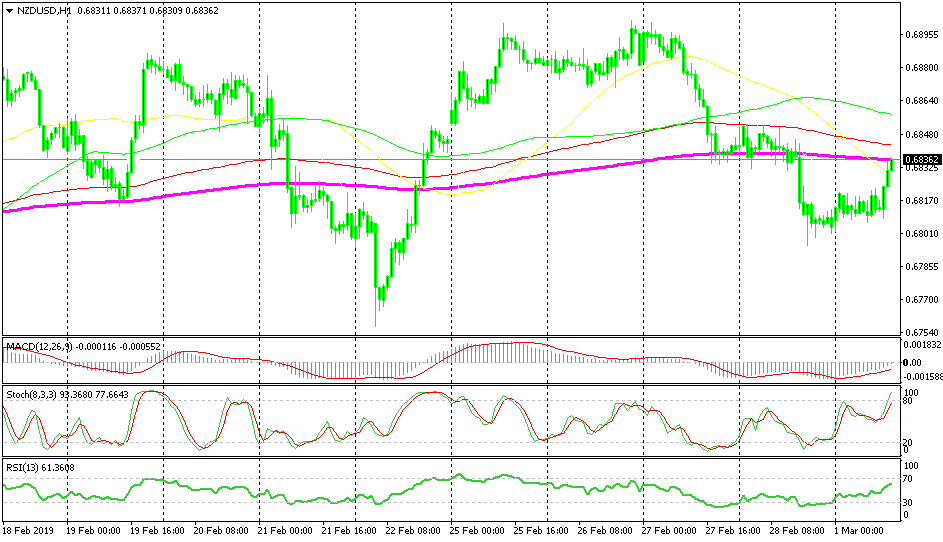 NZD/USD turned bearish earlier this week as the sentiment deteriorated in financial markets. As a result, risk currencies such as commodity Dollars suffered. The trend is still bearish but during the European session we saw a 30 pip jump higher which is a retrace of the bigger downtrend, so we decided to sell this pair. The retrace ended at the 200 SMA (purple) and now a bearish reversal has began.

The manufacturing figures from Europe were quite soft again today. Although, the Euro is still retracing higher against the USD. The US manufacturing report will be released soon which will show where this sector stands in America. Although, I am pretty sure that manufacturing will once again be in a much better shape in the US than in the rest of the developed world.

Forex Signals Brief for August 20: Mixed Markets on Mixed Economic Data
8 hours ago
Shorting AUD/USD After US Philly Manufacturing Jumps
US Philadelphia manufacturing index posted an unexpected improvement, which is helping the USD, so we decided to open a sell forex signal in
1 day ago