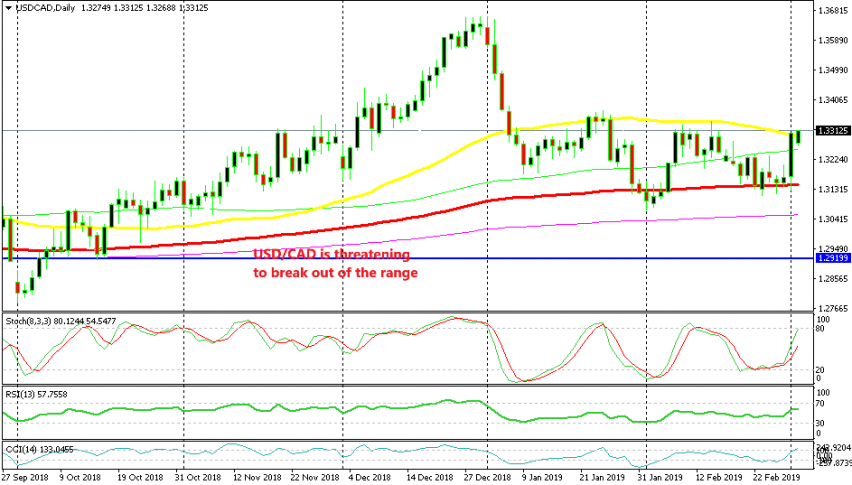 The 50 SMA is in danger now on the daily chart

USD/CAD has been trading between two moving averages after it made a bearish reversal at the beginning of January. The price declined for around 6 cents in the first week of this year, which seemed like a major trend reversal given the bullish reversal in crude Oil. But, the sellers didn’t have enough fuel to continue the downtrend and we have seen USD/CAD bounce up and down between two MAs since then.

When markets closed last week, we left this pair right at the bottom, trying to break the 100 SMA. This morning, we find USD/CAD around 180 pips higher at the top, trying to break the 50 SMA. The price has moved above the 50 SMA now which seems like a break. That would put this pair back on the bullish trend that we saw last year, but we have to wait a bit longer to see if this is a real break, or just a fake-out.

I’m not sure where this move is coming from because Crude Oil has been bullish today. In fact, commodity Dollars opened with a bullish gap last night after some positive comments on international trade, but the CAD has lost nearly 2 cents.

It could just be a technical move, in which case this would be a good opportunity to sell. But the move has been too strong to go against it. So, I’m not selling USD/CAD here. I think this might actually be a real breakout out of this 200 pip range.

Check out our free forex signals
Follow the top economic events on FX Leaders economic calendar
Trade better, discover more Forex Trading Strategies
Related Articles
USD/CAD Continues the Bounce Higher After MAs Hold As Support
USD/CAD has turned bullish this week, as US economic indicators improve and MAs hold as support for this pair
4 hours ago
USD/CAD Ready to Turn Higher After Softer Canadian Inflation Figures
Consumer inflation cooled off in Canada as well during July, which might be a bearish factor for the CAD
2 days ago