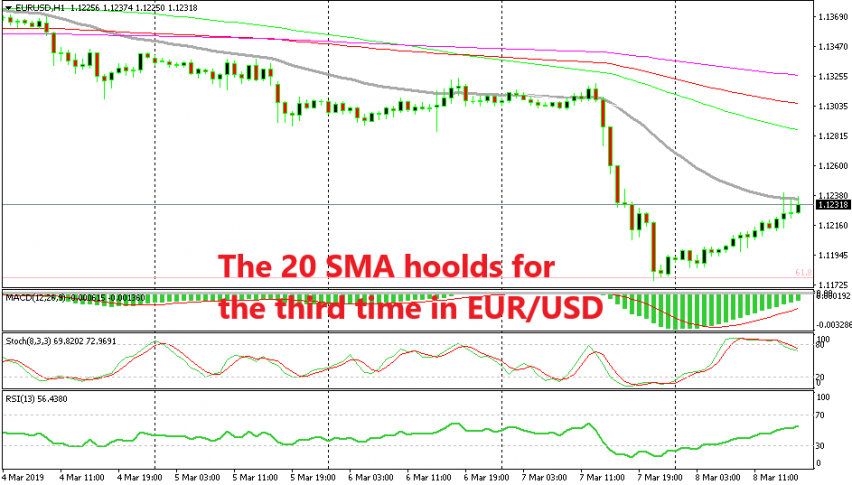 The bearish reversal setup is taking form on the H1 chart

The US employment and building reports were positive as they were released a while ago. Yet, the markets seem to be focusing only on the non-farm employment change numbers which were quite low. They came at 20k against 180 expected but that shouldn’t be sees with such a negative eye since it is coming from two very strong months as jobs grew by more than 300k in December and January.

But, markets see what they want to see and the USD lost around 30 pips after the release. EUR/USD jumped 25 pips higher immediately after the publication but the price retreated back down at the 20 SM (grey) n th H1 chart. We saw another attempt at this moving average the following hour, but again the 20 SMA rejected the price.

Now, we back up and trading just below the 20 SMA. But, we will see if the buyers can take out this moving average. In fact, the chart setup in this pair looks quite bearish as the retrace higher is overbought as stochastic indicates, while the previous two candlesticks closed as dojis which are reversing signals, apart from the 20 SMA.

Fundamentals are also pretty bearish for the Euro after the European Central Bank turned dovish yesterday.  So, everything is pointing down, but markets are in their own world right now so we will see if the bearish reverse will come soon and the bigger bearish trend will resume.