USD/CAD Bounces Off MAs, but I Don’t See it Moving Too High - Forex News by FX Leaders 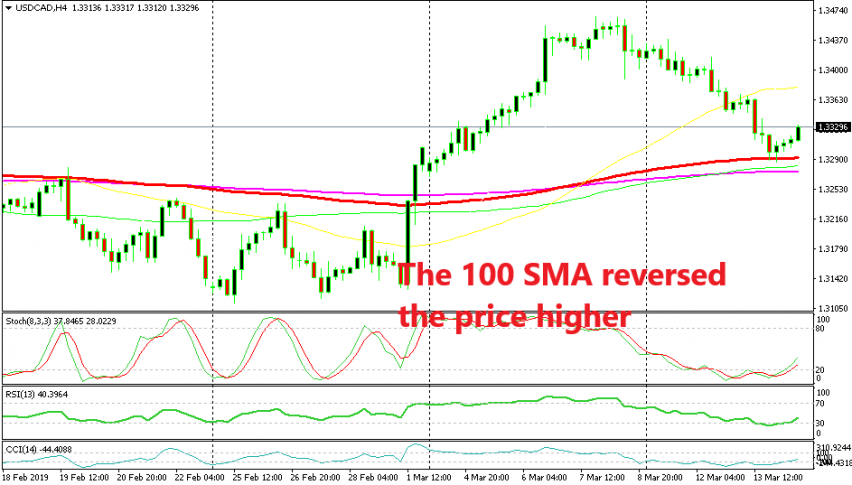 USD/CAD Bounces Off MAs, but I Don’t See it Moving Too High

Retrace or reverse for USD/CAD?

USD/CAD has been trading on a bearish trend for about a week since it reversed lower last Friday after the soft US non-farm employment change figures. This pair has lost nearly 200 pips during this time and it is also being helped by the bullish move in Crude Oil which has climbed around $4.

But it reached the confluence of moving averages yesterday where it found support. The 100 SMA (red) was the one to provide support but the other two moving averages also have a support area surrounding them, so they did the job together this time on the H4 time-frame.

The price also formed a hammer right above the 100 SMA which is a reversing signal. The stochastic indicator was also severely oversold, so a bullish reverse was long overdue. But, I don’t see the price running too high, which means that this could be a retrace before the bearish move resumes.

That’s for two reasons; first, because while the other commodity Dollars have declined considerably, the CAD has only lost 50 pips, which means this is more of a USD move. The overnight decline in AUD/USD and NZD/USD seems to be overstretched right now and if it ends, USD/CAD will be the first to reverse. Second, because Crude Oil has retraced down to a previous resistance which will likely turn into support now. So, if you are long on USD/CAD for last night lows, then you better keep an eye on the price action.

Shiba Inu Price Forecast - MAs Continue to Keep SHIB/USD Bearish, While Most of the Crypto Market Has Turned Bullish
10 hours ago