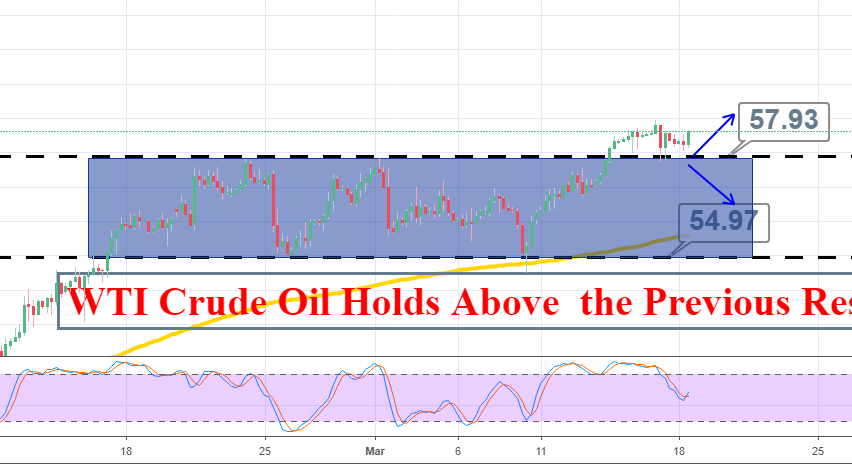 US WTI Crude Oil has been trading in a range between the $55 and $58 for about a month from the middle of February until last week. It made a decent bullish reversal at the end of December after bottoming out above the $42 level and climbed nearly $16 cents, but it got stuck during the last several weeks.

Although, the range was broken last week and the top of that range which used to be resistance, has now turned into support for Crude Oil. We have seen a few attempts to push back below the top of the range which stands at $58 give or take a few pips, but the buyers have come into play at that level.

OPEC is also helping the buyers as they keep repeating that they will keep the production cuts in place. The Saudi oil minister said earlier today that “Saudi Arabia needs a few months to drain excess inventory”. He remains confident that March oil output cuts compliance will exceed 100%.

We don’t know if they will keep to the promise of 100% compliance but US WTI oil moved 50 pips higher on those comments. OPEC+ is postponing the April meeting for May it seems. So, right now the sentiment is bullish in Oil and OPEC’s comments are helping the buyer’s cause. Going long at the top of the range looks the way to go for Oil traders. So, we will be waiting on a retrace lower and probably go long on Oil from there.