US Session Forex Brief, March 20 – GBP Dives on Brexit Extension While the Rest of the Market Awaits the FED - Forex News by FX Leaders

US Session Forex Brief, March 20 – GBP Dives on Brexit Extension While the Rest of the Market Awaits the FED

It's proving too difficult for the UK to leave the EU

The main movers today until abut two hours ago were the Commodity Dollars and the JPY. The Iron Ore prices lost considerable ground today and they’re still falling, which has hurt the Aussie, as Australia is a large exporter of raw materials and this adds up with the closing of the China Dalian port for Australian coal. That also pulled the Kiwi lower, but they have recuperated last night’s losses while Iron Ore is still declining.

Although, in the last couple of hours the GBP has taken the flag as the biggest mover so far today. GBP/USD has been bearish all morning today, losing around 50 pips, but then the comments regarding another Brexit extension came and this pair lost another 100 pips. The EU gave the UK two options for another Brexit extension, one until May 23 which would be a short extension, and the other until the end of the year, which would require the UK to hold European elections in Britain one last time. But, Theresa May asked for an extension until June 30, so things look a bit complicated now, hence the decline in the GBP pairs.

Although, the rest of the market is not minding the price action in the GBP. Most assets have been sort of quiet as we head towards the FED meeting this evening. The FED is expected to keep interest rates on hold today but the statement and the press conference is what’s keeping traders weary. We have been seeing some run for safety in the European session with USD/JPY and EUR/CHF retreating lower as well as the stock market. So, it seems that traders are stepping back as we approach the FED meeting. 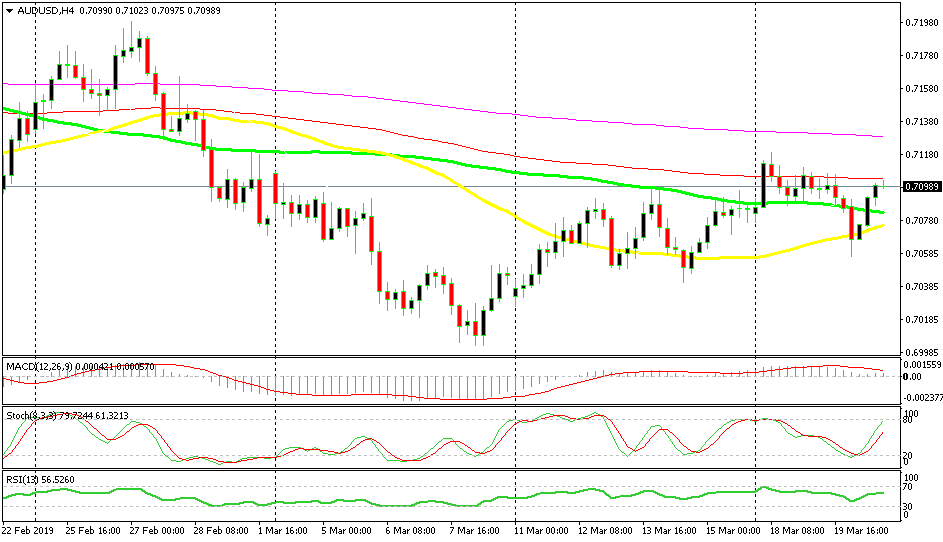 The 100 SMA is providing resistance on top

We went short on AUD/USD a while ago based on the H1 chart. The price had recuperated well after the decline during the Asian session and the 50 SMA was providing resistance on that time-frame. But the price has climbed 10 pips higher since then, although it is now finding resistance at the 100 SMA (red) on the H4 chart. Stochastic is almost overbought now so the bullish move is almost complete.

The volatile price action in GBP pairs continues as I write with GBP/USD having declined nearly 150 pips earlier but has now recuperated 60 pips. Although, the rest of the markets continue to be slow as we head into the FED meeting which will be held an hour earlier for those who don’t live in the Americas due to the clock change in America two weeks ago.