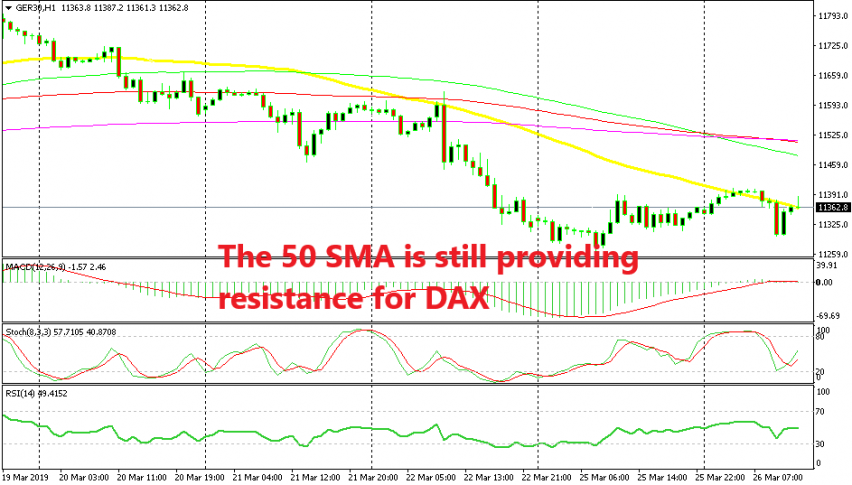 If the 50 SMA breaks, then the buyers have a chance to reverse the downtrend

Stock markets turned bearish last Wednesday in the US session after making a strong bullish move in the European session. The FED was the reason for this reversal as they turned neutral from hawkish previously. That turned the sentiment negative in financial markets as worries about a global economic emerge.

As a result, safe havens such as the JPY and the CHF turned bullish, while risk assets turned bearish. Stock markets have been declining since then in what seems to be a decent pullback of the bigger uptrend that started at the end of last year, which could turn into a bearish reversal in large time-frame charts.

So, until now, this decline is still a retrace on larger charts, but on the H1 chart, DAX is on a downtrend. Yesterday this index bottomed out at 11,260 and it has been trying to turn bullish in the last few sessions. Although, the 50 SMA (yellow) provided resistance during the Asian session today.

The price broke above it but it didn’t get too far and eventually reversed down. Now, we’re seeing another attempt from the buyers to reverse the DAX as the sentiment is improving. But, the 50 SMA is still giving buyers a hard time.

The current H1 candlestick looks like an upside-down pin now and if it closes like that, it would be a strong signal that the buyers are finding strong resistance here and the price will likely reverse back down a and resume the downtrend. So, this is the test now – if Dax pushes above the 50 SMA and remains there, then perhaps we can say that the decline in stock markets will be over. Otherwise, the sellers will remain in control.