US Session Forex Brief, April 2 – The USD Remains the Strongest Currency in Forex but Cryptos Outperform

During the Asian session today we had the meeting from the Reserve Bank of Australia (RBA). Building approvals from Australia were released a few hours before the meeting and they showed an impressive 19.1% jump which is the biggest increase since July 2012. But, that doesn’t fare well for the AUD because house prices have been declining in Australia and more construction would mean even lower prices as the supply side increases.

The RBA shifted from slightly hawkish to neutral/dovish in the previous meeting, so it was interesting for AUD traders to see where they stood this time. The RBA solidified their neutral bias today and it put more emphasis on risks to the economy. This left analysts thinking that the RBA might turn even more dovish in the next meeting, although it depends how the data and the global economy will perform until then, I assume. Nonetheless, the Aussie turned even more bearish and it is the weakest currency today.

Another thing to take our attention this morning was the surge in cryptocurrencies. BITCOIN surged around $900 in less than two hours, bouncing from above the $4,000 area which now seems to have turned into support to above $5,000. It eventually pulled back lower, giving up some of the gains, but cryptos remain quite bullish today. In forex, all major currencies have been weakening further today apart from the USD which continues the uptrend of the last several days. 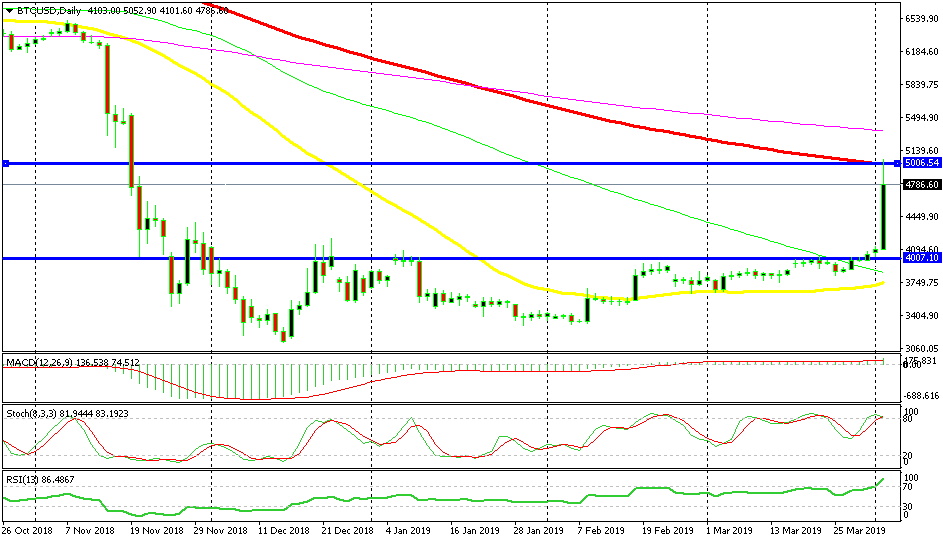 The 100 SMA held the surge in bitcoin

Bitcoin has been on a major bearish trend since December 2017. Although, the decline stalled in December last year and we have seen a slow uptrend form in the previous months. Today, Bitcoin spiked higher climbing nearly $1,000 but it stopped at the $5,000 level where we can find the 100 SMA (red) on the daily chart as well. We decided to get in on the bearish trend after this retrace higher and go short on Bitcoin. Now let’s see if this was just a retrace before the next leg of the bearish trend begins, or whether it is a trend reversal, which I doubt.

The US durable goods orders today showed a major decline but the USD didn’t mind much since the core orders ticked higher. Although, the USD isn’t going anywhere now either and markets seem to be frozen, so it’s getting sort of difficult to pick a trade. If anything comes up, we will be here to share it with you guys.