Today we had some positive fundamentals coming out which have affected financial markets positively. In the Asian session, the Chinese Caixin services PMI indicator jumped more than three full points higher, beating expectations. That comes after the bullish reversal in Chinese manufacturing data we saw on Sunday and earlier this week, which suggests that the slowdown in the Chinese economy might be coming to an end. After all, manufacturing turned into expansion in March after contracting during the previous three months, and services showed a considerable expansion as well. Besides that, we heard rumours from Financial Times today that China and the US are getting very close to a final trade agreement. These events helped the sentiment turn positive today.

But that wasn’t all. The services report from the Eurozone also showed a turnaround in March. The manufacturing sector is deep in contraction in Europe and the services sector was headed there as well in the recent months. But today, we saw a jump in services PMI  in all major European countries. This is another sign that the global economic slowdown might be coming to an end. At least, the global economy is not slowing down as fast as it was until last month. The UK services PMI dived in UK, but Britain is a special case now with Brexit and everything. 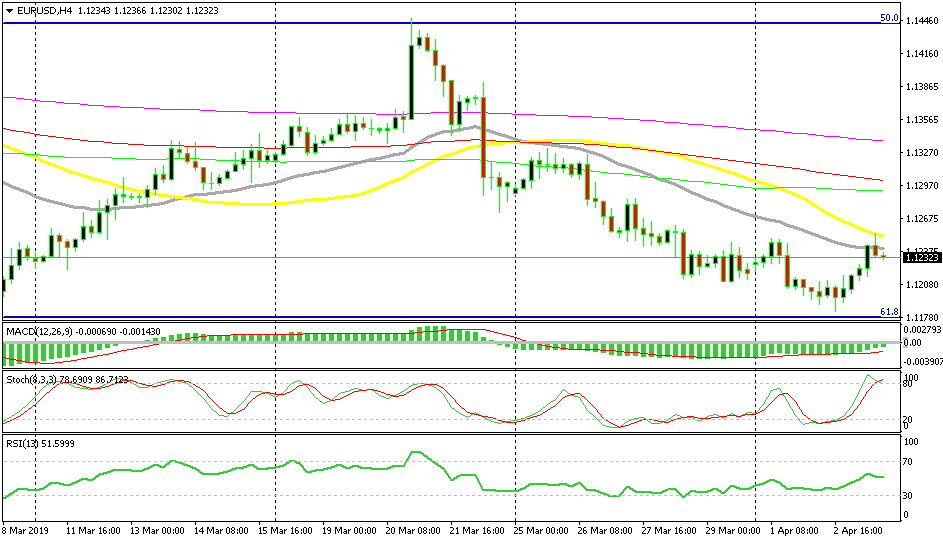 The 100 SMA held the surge in bitcoin

Earlier on we went short on EUR/USD as this pair was retracing higher on positive Eurozone services data. Although, the retrace continued higher to 1.1255 where it met the 50 SMA (yellow). The H4 candlestick closed below the 20 SMA (grey) which has provided support and resistance before so both moving averages are providing resistance. Stochastic is also overbought and the previous candlestick closed as an upside-down hammer which is a strong reversing signal. Besides, the trend is still bearish.

The sentiment has turned quite positive today as the economic data from around the globe is showing that the global economy expanded in March after slowing down for about a year. That has stock markets running higher today and risk currencies are also on a bullish move, especially the Aussie. But, don’t get too excited and nurse your trades if you are long, because this week’s positive reports are just a one off and we might see more negative fundamentals in the days to come.

Forex Signals Brief for August 8: Will Inflation Show Signs of Slowing This Week?
5 days ago