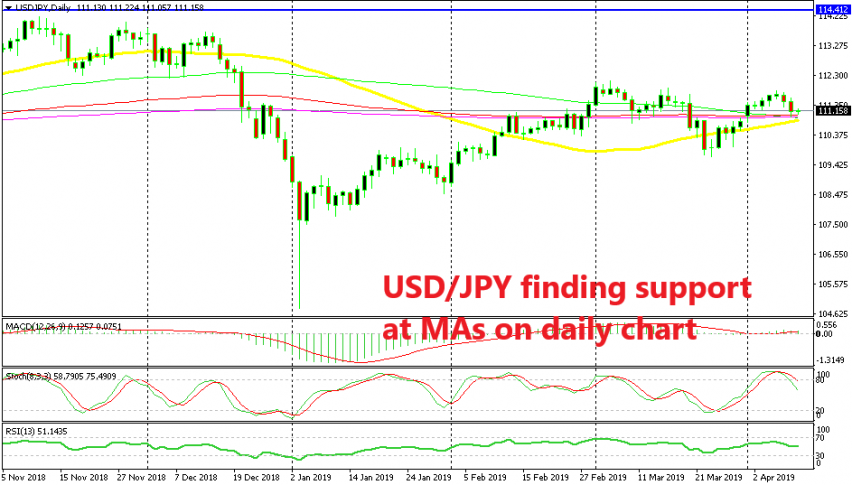 USD/JPY has been trading in a bullish trend since the beginning of the year when it lost around 5 cents in two days on very thin liquidity right after New Year’s day. But, it reversed on the 3rd of January and it has been trending higher consistently since then.

But, in the last two months we are seeing that buyers have been experiencing difficulties at the area surrounding the 112 level. The price moved above 112 in March but then retraced back down below 110. Last Friday, the buyers had another go at the 112 level but this time they didn’t even reach it and the price started reversing back down.

Friday’s candlestick closed as a doji which is a reversing signal and the stochastic indicator was severely oversold too. That is a bearish reversing pattern and the reverse is taking shape now. The last two daily candlesticks look pretty bearish and Donald Trump’s tweet yesterday on EU tariffs helped the sellers.

But now the sellers are facing the 100 SMA (red) and the 200 SMA (purple) on the daily chart. Whether or not the price will break below these moving averages depends on how the sentiment will be in financial markets. If another trade war begins, this time between the EU and the US, then chances are that this pair will dive deep, probably to the lows of this year. So, we will have to follow the trade comments between US and EU officials in the coming days for the direction of this pair.