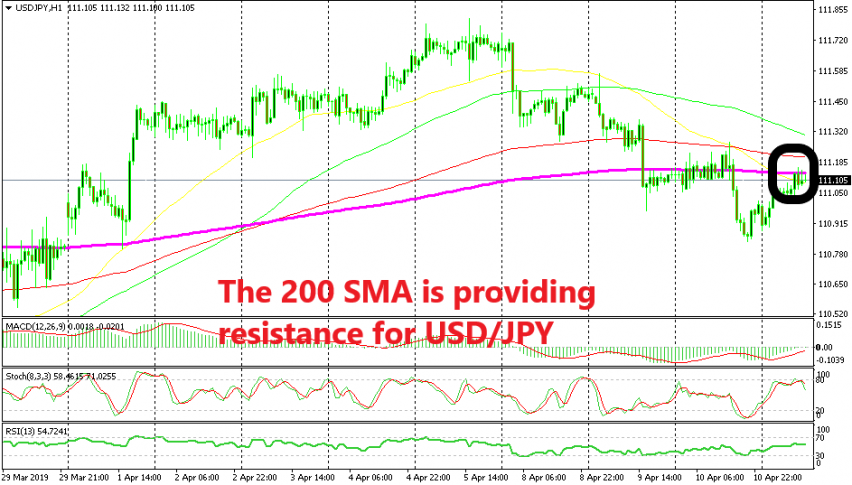 USD/JPY has been declining this week

USD/JPY has been trading in a bullish trend since the beginning of this year, after it crashed nearly 500 pips lower in the first two trading days of the year amid very thin liquidity. The decline stopped on January 3rd and since then this pair has been pretty bullish with the occasional pullback lower.

This is one of those periods when the price retraces lower so the trend can be refreshed, before the net move up. This week has been pretty bearish with USD/JPY losing around 100 pips after it formed a Doji candlestick on the daily time-frame chart, which is a reversing signal, and the bearish reverse has been unfolding all week.

There have been some mixed feeling in financial markets this week as the sentiment shifts from positive to negative and vice-versa, but the safe haven assets have received some decent bids which usually occurs when there is uncertainty. So, we decided to go with the flow and short USD/JPY.

Yesterday this pair pushed below the 111 level, but it has been retracing higher since late US session and it crawled higher in the Asian session. During the European session today, we have seen a few weak attempts to push past the 200 SMA (purple), but it seems that this moving average has turned into resistance for this pair now. Stochastic is overbought and it is reversing lower on the H1 chart and the price has formed a coupe of doji candlesticks which are reversing signals. So, short we went right below the 200 SMA, now waiting for this week’s bearish trend to resume.