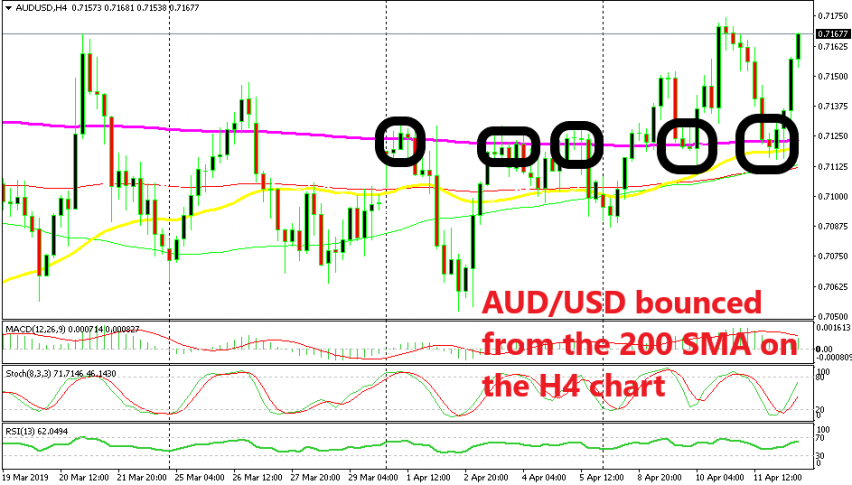 200 SMA has turned from resistance into support for AUD/USD

The jump in the Chinese trade balance has improved the market sentiment. The details show that despite the small increase in exports, the increase in trade balance/surplus has come mostly because of falling imports, which declined by 4.8% year-on-year, showing a softening demand from the Chinese consumer.

This should be a negative thing but the market just looked at the headline figures I suppose and the risk sentiment has turned quite positive right now. Risk assets such as stock markets are surging, which are pulling higher risk currencies as well. Commodity Dollars, in particular, tend to attract decent bids when economic figures from China are positive and the improved sentiment is adding further fuel to them.

AUD/USD had a bearish day yesterday as it lost nearly 60 pips from top to bottom. But, we see that this pair found support at moving averages. The 200 SMA (purple) provided solid resistance last week and this week it seems to have turned into support. The 50 SMA (yellow) added more strength to the support area and this pair made a reversal from there during the Asian session.

The stochastic indicator was oversold as well at that time which meant that the bearish move was complete and soon the reverse happened. The Chinese data gave this pair a boost this morning and now this pair is threatening this week’s highs. So, we have a bullish bias for commodity Dollars now until the sentiment shifts to negative again. Probably Donald Trump will take a jab at China later on when he wakes up and finds a growing deficit with China despite promises from the Chinese to increase purchases from the US.