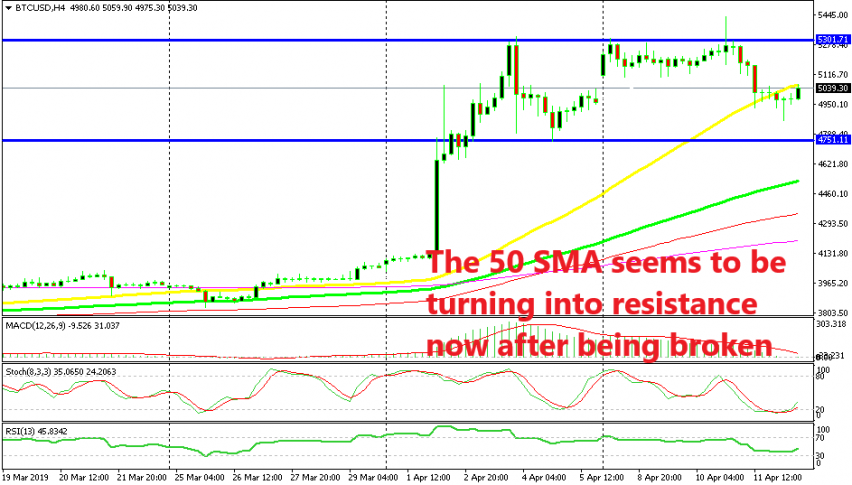 Bitcoin trading inside a range for 2 weeks

The buyers have suddenly taken control in cryptocurrencies in the last two weeks as Bitcoin finally broke above the $4,000 level which used to provide resistance for several months. BITCOIN bulls also pushed above the $5,000 level which is a big round number but another resistance level formed at $5,300 which has been keeping buyers in check during the last two weeks.

On Wednesday evening, the buyers had a try at the new resistance level and pushed to $5,435 on my platform, but the price reversed down pretty quickly, so that doesn’t count as a break of the resistance. After that failure which was a positive sign for Bitcoin sellers like us, the price continued to slide lower and dipped below the $5,000 level again yesterday.

Although, the 50 SMA (yellow) held the decline and provided support throughout the day, until it was finally broken today during the Asian session as the 50 SMA continued higher while the price slipped lower. The low on my platform today stands at $4,860, which is around $100 above the support at $4,750.

Although, Bitoin formed a pin candlestick on the H4 time-frame which is a bullish reversing signal after the decline and it is now crawling higher. But, we are still below the 50 SMA and I hope that this moving average turns into resistance now. At the moment it looks like it is having difficulties pushing above the 50 SMA. If the 50 SMA holds, then the target will be the support level at $4,750 and after it breaks (if it does), that would open the door to $4,000-$4,200. But first, let’s see how BITCOIN behaves at current levels below the 50 SMA