US Session Forex Brief, Apr 15 – Risk-On Sentiment has Faded, While EU Tries to Play its Cards with Trump - Forex News by FX Leaders

US Session Forex Brief, Apr 15 – Risk-On Sentiment has Faded, While EU Tries to Play its Cards with Trump

A chess game has started between the EU and the US

The sentiment turned quite positive in financial markets in the last two weeks after taking a dive at the end of March due to deteriorating manufacturing data from the Eurozone, as well as the fact that almost all major central banks shifted from hawkish to dovish or neutral. But, in the last two weeks we saw some green shots in the economic data; the services sector in the Eurozone turned to expansion again and so did the manufacturing sector in China, which eased worries of a global recession. As a result, risk assets such as stock markets and risk currencies have been climbing higher, while safe havens such as the JPY and the CHF have been declining, and hence the bullish reversal in EUR/CHF and in USD/JPY.

Although today, it seems like the risk-on sentiment has faded as commodity currencies are lower while the JPY is a tad higher. But, it’s not that there’s much action today in financial markets.. The economic data is very light today and markets don’t have a reason to run in either direction.

Although, they might be on hold now as the confrontation between Donald Trump and the EU increases. Last week, the EU promised to retaliate if Trump place tariffs on European goods, but today we heard rumours that the EU will start trade negotiations with the US. EU Trade Commissioner Celia Malmstrom said that the EU is ready to start talks with the US but if the US places more tariffs, the EU will retaliate and publish a list of US goods/services on April 17. So, traders are a bit confused now and waiting on the sidelines just in case another trade war starts. 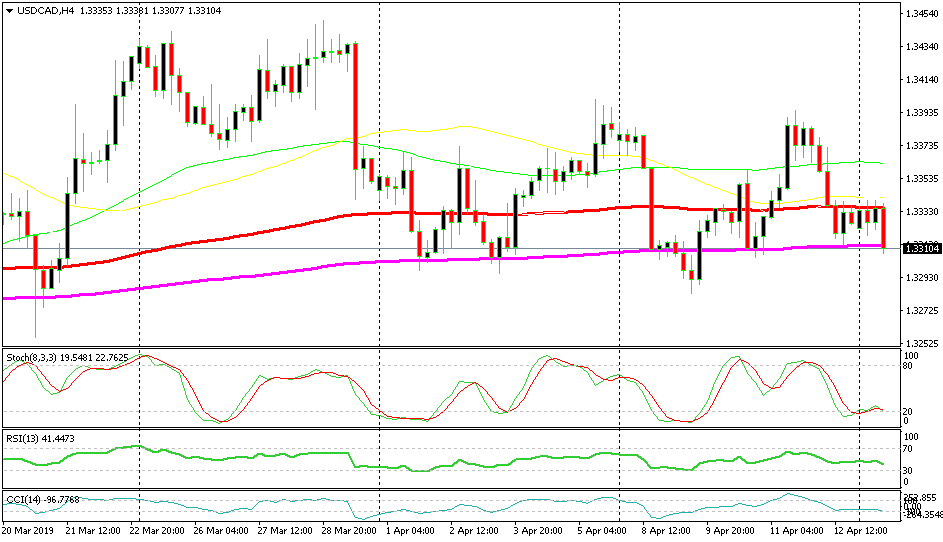 Last Friday we went long on USD/CAD as this pair was declining on some USD weakness towards the end of the week. The price was close to the 200 SMA (purple) which had been providing support for two weeks and the H4 chart was oversold. Today, the 200 SMA continues to provide support and the stochastic indicator is still oversold on the H4 chart. So, let’s hope for a bounce from here.

The sentiment has been mostly dull today during the first two trading sessions and, as a result, the price action has been very slow. But, we are seeing a move right now as risk assets start to increase as the sentiment starts to improve. This probably has to do with the better-than-expected figures from the earnings reports of Goldman Sachs and Citigroup that we highlighted above as well as the reverse in the Empire State manufacturing index, although it’s too little and too early to tell.

Can the ECB Hike Much As Economy Heads Into Recession?
2 weeks ago