Bitcoin is at a very important key level right now. It could be the end of the bear market, however, the bears still have some chances to see a lower low. There could be clouds on the horizon if the consolidation phase doesn’t end in a bullish breakout. In fact, it shouldn’t take long until we see a major move in one of the two directions. To understand the chances of the market trending up or down, we will take a look at the technical analysis of Bitcoin, Ethereum and the total market capitalization. 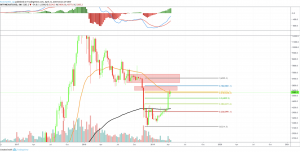 While the weekly MACD remains bullish and the histogram ticks still higher, the golden pocket fib extension level acts as the most important key level right now. In fact, Bitcoin is still in a bear trend. A rejection of the golden pocket zone would most likely result in a heavy downward movement. Bitcoin is facing multiple resistances at this level at $5300-$5500, such as the 50-week-EMA and the minor resistance between $5480-$5780. To assume a re-test of the $6000 mark, we need to see a break of the golden pocket zone. If Bitcoin gets rejected there, it finds its next support between the 0.382 fib level and the 200-week-EMA at around $4200-$4500. While this level acted previously as strong resistance, it now acts as strong support. However, it is important to understand that a golden pocket rejection is extremely bearish. Chances are high that the support will be bearishly broken. 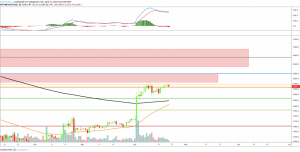 The daily chart is quite bearish, as the MACD ticks lower and recently crossed bearishly. While Bitcoin rejected the resistance so far, it finds minor support at the 200-day-EMA as well as the 50-day-EMA which are located at the same spot. If Bitcoin continues to decline, it could potentially form a double top pattern which is extremely bearish. With attention to the golden pocket fib extension level, Bitcoin is likely to fail to hold its support at roughly $4700. 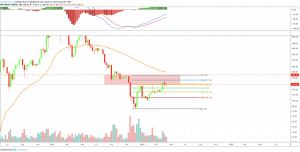 Ethereum looks very similar to Bitcoin. Although Ethereum managed to exceed the golden pocket zone short-term, it was quickly followed by a steep decrease in price. Currently sitting at $168, Ethereum is at very important key resistance. A rejection by this level could result in a decline to the 0.382 fib level at $135 or even to the next major support at $115. For now, Ethereum needs to break the major resistance between the golden pocket and the 50-week-EMA to remain bullish. While the MACD is still bullish, the histogram is already ticking lower which is a bearish sign. 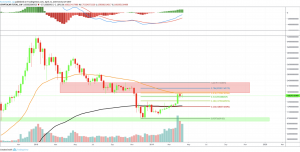 The cryptocurrency market faced rejection of the golden pocket zone so far, where the 50-week-EMA acts as additional resistance. In fact, both resistances are located at the lower end of major resistance between $180b and $230b. If the total market capitalization doesn’t manage to break this level, it finds its next support at the 200-week-ema where the 0.236 fib extension level is located at, at $128b. Before reaching down to this level, the market could short-term support at the 0.382 fib level at $147b. The MACD, however, remains bullish so far.

The top gainers of this week were
MONA, which rose by 120 percent,
SOLVE, which gained by 117 percent, and
BAT, which surged by 74 percent.

The major news this week was that Coinbase announced to expand their service to eleven other countries and that e-Toro launched a cryptocurrency exchange including eight custom stable coins.