Risk sentiment is off once again across all markets

The sentiment has been positive in recent weeks in financial markets as Chinese data last month showed that the fiscal and monetary stimulus is working. Stock markets have enjoyed some decent bids during this time. But today, the risk sentiment has been switched off again. Markets were really quiet, following the Easter weekend. Markets were open on Friday and yesterday, but the price action was very slow and it continues to be like that today as well, although the shift in the sentiment is finally giving us some action and a few pips here and there.

US officials said during the weekend that they will go ahead with full sanctions on Iran’s Oil. There are already US sanctions on Iran but they have been partial. China opposed this obviously as it sucks up almost all Iran’s Oil and markets are getting worried that another confrontation between the two giants might mean trouble for the global economy.

But that’s not all; Donald Trump just tweeted a while ago that the EU tariffs on Harley Davidson are unfair and that the US will reciprocate. It looks like Trump is pushing for a trade war with the EU, because the EU applied these tariffs after the Steel and Aluminium tariffs that Trump slapped on everyone early last year. 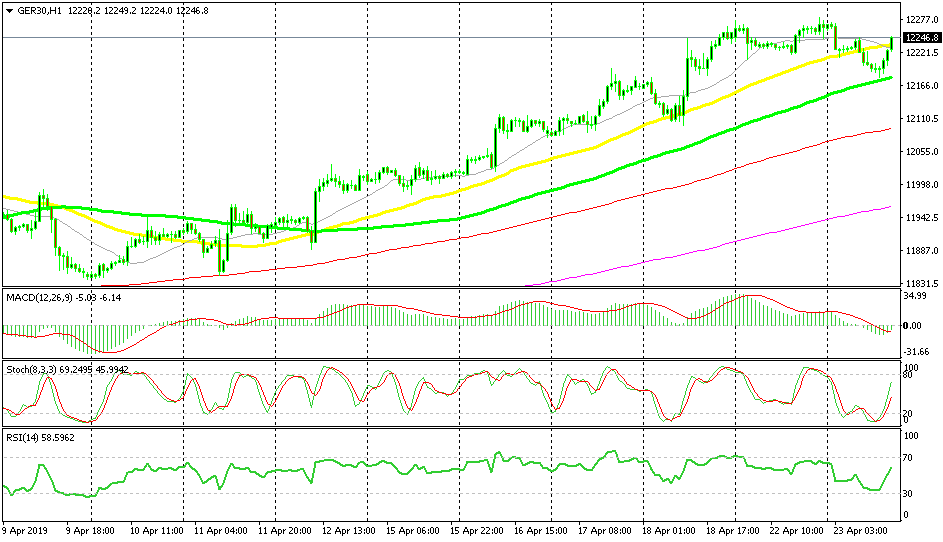 The 100 SMA has turned into support for Dax today

As I mentioned in a previous forex update, stock markets have been on a bullish trend all year so far, but today they retraced lower during the Asian and the European session as sentiment turned slightly negative. The 50 SMA (yellow) has been providing support for this index last week but today it was broken. Although, the 100 SMA (green) held its ground well and provided solid support. We went long from there and now Dax has reversed back to bullish. It has also broken back above the 50 SMA so the uptrend is back in place.

The markets were pretty quiet until a few hours ago, but now they are moving on the USD side. Donald Trump’s tweet about retaliation regarding EU’s tariffs on Harley Davidson is hurting the sentiment further, but it is turning out to be a positive thing for the USD. At the moment, the USD is the only currency which is moving up, while everything else is tumbling lower.