More Expensive Oil And A Dovish Fed Has Sent The Loonie South.

With the Easter holidays behind us, the financial markets are finally showing bigger moves in currencies. It going to be an interesting day from a trading viewpoint with a busy economic calendar. We got fundamentals from the Eurozone and Canada. However, Wednesday’s biggest event will be the Bank of Canada’s monetary policy announcement.

Earlier today, the Australian dollar dropped after weaker than expected inflation in the first quarter, raising expectations of a possible rate cut by the central bank. Consumer prices expanded 1.3% year on year in March, against February’s reading of 1.8%. The reading also missed the economist forecast of a 0.2% rise.

In this update, we will see what to expect from the Bank of Canada along with a trading plan for USD/CAD.

German Ifo Business Climate – 08:00 GMT
After ZEW’s survey of businesses climbed back up to a positive area, the real test comes from Germany’s No. 1 Think Tank. Ifo Institute for Economic Research will release the business climate figure. It’s forecast to be released at 99.9 vs. 99.6 in the previous month.

Let us recall, it’s a survey of about 7K businesses which asks respondents to rate the relative level of current business conditions and expectations for the next six months. The figure can help investors with future trends of the Euro.

Canadian Rate Decision – 14:00 GMT
Lately, the Bank of Canada made a dovish drop, following the lead of other central banks. The BOC has been one of the few central banks among liberal economies (apart from US Federal Reserve) that’s been able to raise interest rates despite the crises and trade war. The Bank of Canada has increased rates four times since 2017 but the hawkish policies seem to get hauled over the slowdown in economic growth.

The BOC is not expected to cut interest rates at this juncture, but Governor Stephen Poloz may provide further comments on the next policy moves in his press conference. The Ottawa-based institution also releases new forecasts. Officials see a potential of growth without inflation. In addition, the fresh BOC Business Survey showed a deterioration in economic conditions. With no rate hike on the cards, the overnight bid rate is expected to stay at 1.75%.

USD/CAD – Is It Good time to Short Oversold Pair?

A day before, USD/CAD shot higher despite mounting crude oil prices. Seems like investors are worried that the central bank could speak about rate cuts. Back in March, the BOC sent USD/CAD tumbling to 2-month lows by showing concern about growth, pointing to increased uncertainty on the timing of future rate hikes. At the time, they were worried about consumer spending, housing, and inflation.

On the technical front, the USD/CAD is trading below 1.3460 which is a double top level. The recent candle is half bullish and half bearish, signifying a neutral sentiment of investors. 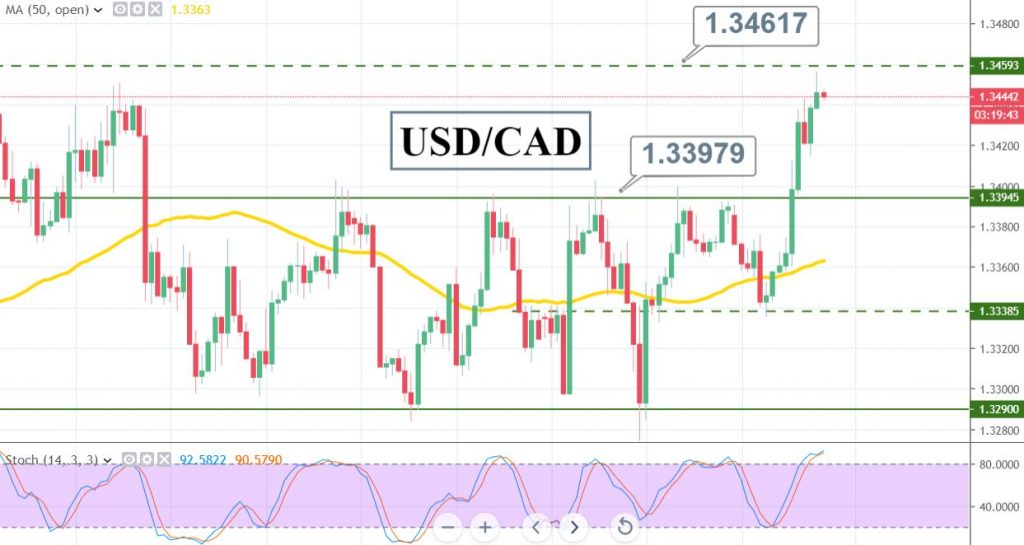 There can be two reasons:
Investors are feeling less confident about taking additional positions in the USD/CAD ahead of Canadian interest rate decision.

Secondly, the RSI is trading in the overbought zone, suggesting chances of retracement or profit taking in the pair.

Fellas, it’s better to wait for the BOC rate decision before taking any position in the market.

so usdcad will sell or