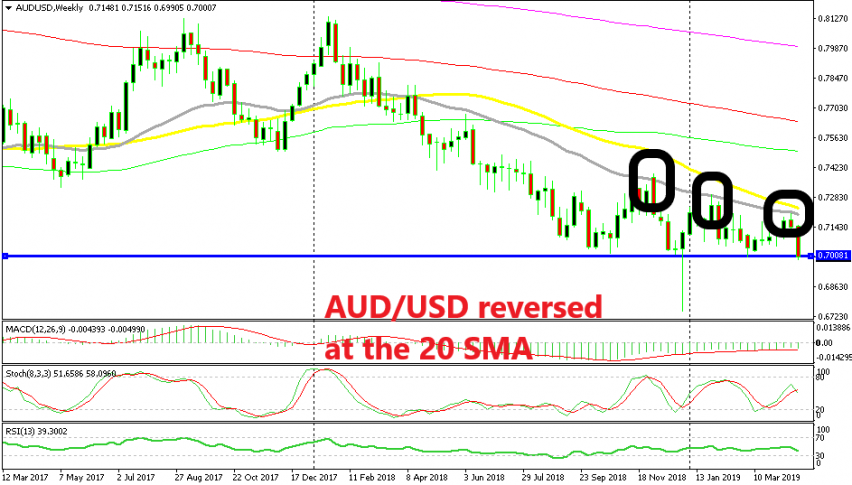 Both Fundamental and Technical Picture Look Pretty Bearish for the Aussie

Commodity Dollars have been trading on a bullish channel during the last two months. It’s not very visible from the weekly chart above, but if you switch to the H4 time-frame, you will see the picture better. Although, the main trend still remains bearish for commodity Currencies and for AUD/USD as shown above.

This pair met the 20 SMA (grey) last week; this pair has been kissing this moving average twice in December and in January and it has reversed back down after that. Now we are witnessing the third kiss and reverse which is underway. The price was close to the 50 SMA (yellow) as well last week, which added more stigma for the buyers.

They gave up right after the price touched the 20 SMA, with the stochastic indicator nearly overbought. Last week’s candlestick closed as a small upside-down hammer which is a reversing signal after the bullish move of the last several weeks and this week the price action has turned totally bearish.

So, technically this pair looks pretty bearish now. The price pierced the support at $0.70 today for the first time since the quick decline at the end of last year, but that was due to thin liquidity in the Christmas period, so it doesn’t really count as a break, because the price returned up really quickly. It looks like we will finally see a break of the big level at $0.70 today.

The fundamental picture also looks pretty bearish. China is making it increasingly difficult for Australian raw material exports to enter China such as the blockade for Australian Coal in one of the Chinese ports last month. Besides, the domestic economy has weakened considerably and now the Reserve bank of Australia is thinking about cutting interest rates in the next meeting after inflation fell flat for Q1, as yesterday’s report showed. So, everything points down for the Aussie, although we should wait for a break of the support to go short on this pair.