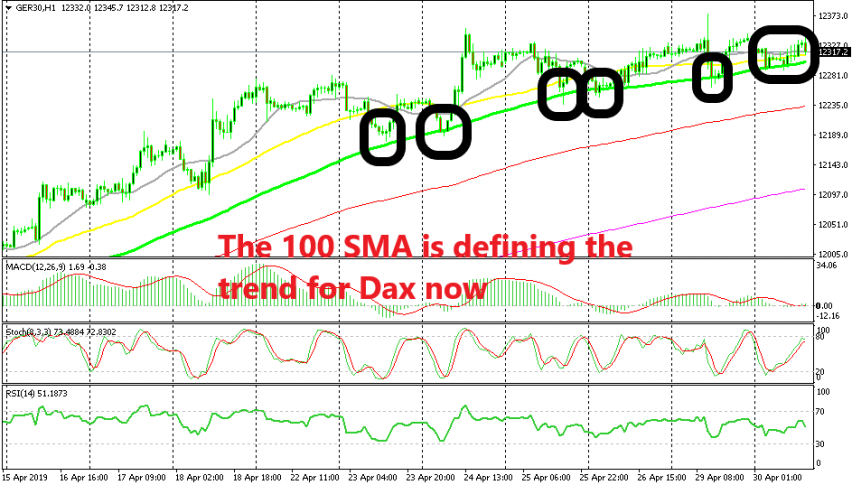 The Trend Slows in Dax30 As Larger MAs Catch Up

The uptrend is in danger now after having slowed considerably

Stock Markets have been on a bullish trend since the end of December last year after having a pretty bearish year in 2018. During this time we have seen two decent pullbacks lower and a few smaller pullbacks in between. The last pullback took place at the beginning of this month but ended at the 50 SMA (yellow) on the H4 chat.

Since then, the pressure has been totally to the upside. After the uptrend resumed after the pullback at the beginning of this month, the 20 SMA (grey) was providing support for Dax, thus pushing the price higher. But then, the 20 SMA became irrelevant and the 50 SMA (yellow) took its place.

This means that the trend slowed down, because when the trend is strong, the buyers don’t wait for larger period moving averages to catch up, instead they jump in at the first MA, such as the 20 SMA at the beginning of this month. In the last several days, the trend has became even slower and we see that now it is the 100 SMA (green) taking up the job as support.

So, the trend has slowed considerably for Dax and other stock markets such as the French CAC have even put up a retrace lower. Now it remains to be seen whether Dax will put up a decent retrace lower or if the trend will pick up pace. But for that we have to follow the market sentiment in the coming sessions. If the sentiment turns negative, then risk assets such as stock markets will pull back lower.

Check out our free forex signals
Follow the top economic events on FX Leaders economic calendar
Trade better, discover more Forex Trading Strategies
Related Articles
Can Stock Markets Resume Decline After the Retrace Higher in July?
We remain short on the German DAX30 index, as it continues to find resistance above at moving averages
5 days ago