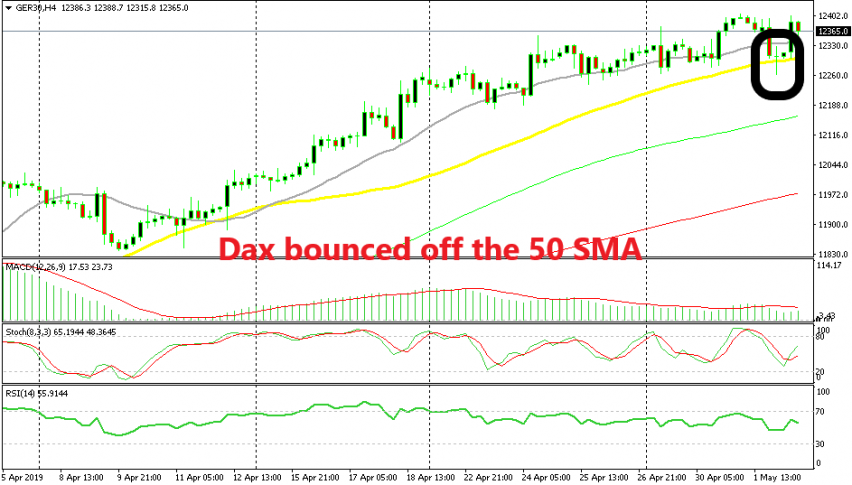 The uptrend remains in lace for Dax

Yesterday in the evening, the FED held their usual meeting which was followed by the press conference from Chairman Jerome Powell. The statement and the speech were pretty similar, apart from the comment from Powell who dismissed the weak inflation as transitional.

Traders were worked up for an even more dovish meeting than the last one, especially after seeing some weak economic figures from the US recently such as the ISM manufacturing PMI which took a dive yesterday. The market took that as a sign that the FED might continue with rate hikes if things start getting better, as opposed to a 60% rate cut expectation until the end of the year, before the FED meeting.

This turned stock markets bearish yesterday in the evening and most stock markets remain bearish today as well, but that didn’t hold DAX down. In fact, Dax bounced higher off the 50 SMA (yellow) which has provided support for this index before. A doji candlestick formed right above the 50 SMA and then came the bounce.

But, the confirmation that the German and the Eurozone manufacturing activity remain in contraction after this morning’s data sent the Dax down again. Although, the 50 MA held again as we see the price retrace higher now. So, the verdict is that the 50 SMA is a good place to go long on Dax as long as the sentiment doesn’t turn too dovish in financial markets.