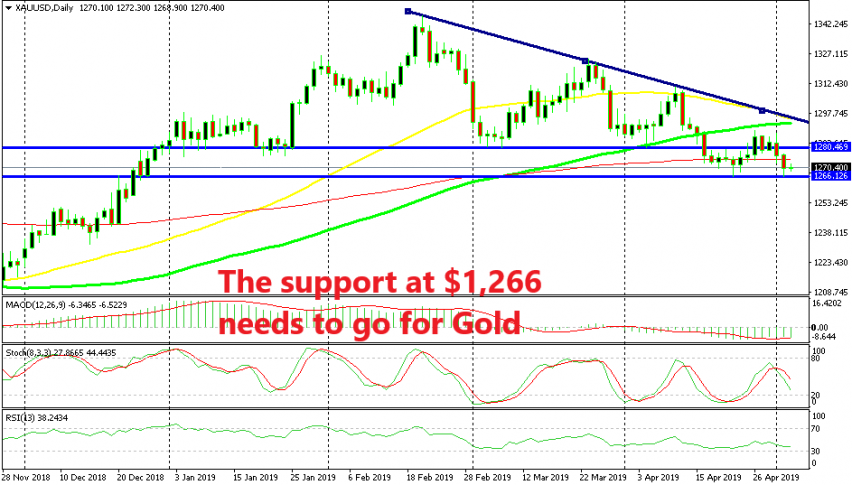 Is the downtrend going to resume soon for Gold?

GOLD has been on a bearish trend since it made a reversal in February. It has been making lower lows and lower highs during this time which tells which side the pressure is, on the downside obviously. But, in the last two weeks, Gold sellers haven’t been able to make new lows.

In fact, Gold has formed a support somewhere around $1,266. That was the low two weeks ago and after the bounce higher, Gold found resistance at the 100 SMA (green). That moving average provided resistance at the end of that week and during the first half of last week, and then the sellers had another try at the downside.

I thought that they were going to break the support this time but the support held once again and we saw Gold jump higher after the US employment and earnings report. Now Gold is back at the 100 SMA and it is finding it difficult to push higher. This suggests that the climb might be over and a bearish reversal is to follow.

The stochastic indicator is overbought on the H4 time-frame chart which shows that the retrace higher is complete. The price has also formed a couple of candlesticks which point down. But, the price is above the 100 SMA now. That should be a bit discouraging for sellers, but another fact that goes in their favour is the failure to push higher overnight after Trump’s tweet for more tariffs on China.

The JPY opened with a gap higher last night and pushed higher during the Asian session, while Gold is not making new highs today. This is a sign that sellers might be exhausted. So, I am thinking of opening a sell forex signal up here with a stop above the 2 MAs above and a take profit target at the support.