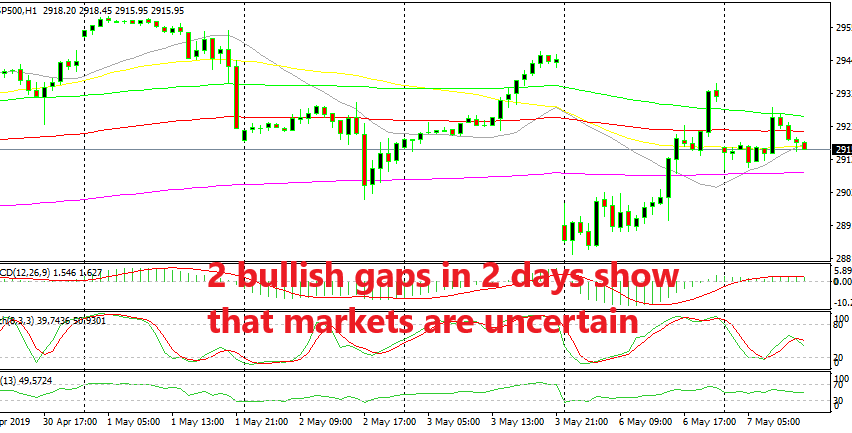 S&P is bouncing up and down this week

The sentiment in financial markets turned negative again this week after Donald Trump’s tweet that the US will increase tariffs on Chinese products to 25% from 10%. This brought back fears that the trade war is going to continue and it might even escalate further which would kill the sentiment and would bring the markets back to the shape they were at by the end of last year, which was a pretty bad shape as everything was deteriorating quickly.

China was said to consider cancelling trade talks with US this week late on Sunday as they have this “strange” policy not to negotiate under threat. Yesterday stock markets opened with a big bearish gap lower, as you can see from the SPX hourly chart above. The gap on this index was more than 50 points wide and despite closing it yesterday, S&P and other major stock indices continue to remain sort of bearish, or, better I say, cautious.

The Chinese delegation is flying over to the US to start trade negotiations on Thursday that they left in the middle. But no things look too complicated. This might be a move to push China to sign the trade deal with the US but China doesn’t like being pushed. Reaching a trade deal was pretty difficult before but it gets even more difficult now.

So I assume markets will remain cautious until the end of the week. If there’s a positive outcome, then they might resume the bullish trend next week, if not, then we might see another big bearish gap next Monday and possibly the beginning of a bearish trend.