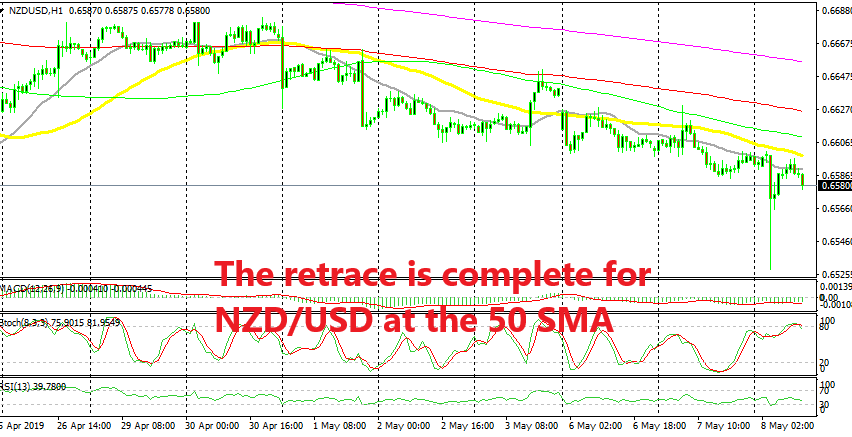 Playing the Downside in NZD/USD as Fundamentals Turn Increasingly Bearish

The bearish trend stretched further after the RBNZ rate cut

The fundamentals have turned pretty bearish for commodity Dollars with inflation declining in Australia and New Zealand, and economic growth softening as the recent GDP reports for Q1 have shown. The central banks have turned bearish and the Reserve Bank of New Zealand cut interest rates unexpectedly last night from 1.75% to 1.50%.

The Kiwi dived around 70 pips lower in a flash move but it pulled back up. Although, the main trend is bearish and I don’t think it will change anytime soon, especially now that tensions between the US and China have been growing. So, fundamentals are quite bearish for this pair now.

Besides, the retrace higher is complete now. Stochastic is overbought now and turning lower while the 50 SMA (yellow) provided resistance, aided by the 20 SMA (grey) as well. The buyers reached their target which were these two moving averages and now the reversal back down has already started. So, we decided to open a sell signal in this pair and now we are short on NZD/USD.

Gold Still Remains the Biggest Beneficiary of Economic Conditions
5 days ago
Selling EUR/GBP Below the 20 SMA, Ahead of the BOE Meeting
EUR/GBP has been quite bearish recently, as the BOE has already has hiked interest rates many time and we decided to sell this pair again
6 days ago