US Session Forex Brief, May 9 – USD Holds Steady Ahead of US/China Meeting

The sentiment turned negative over the weekend in financial markets after US President Trump tweeted that he was going to increase tariffs on China from 10% to 25%. That came as a surprise, given that the two giants had agreed on many things and they were coming to a conclusion, even though the deal wasn’t going to be great for all parties involved. Besides that, they were going to hold on another meeting this week, so those threats for increased tariffs seemed strange.

But, not now that we know the reason. China fell back on several main issues that the US had a problem with, such as IP theft, forced technology transfer, government intervention in markets, etc. So, we can’t blame Trump for those threats now because if China doesn’t promises to tackle these issues, then the deal will be just a piece of paper.

The market sentiment has turned negative this week as a result and stock markets are in a decline which is now threatening the bullish trend which started at the end of last year. Commodity dollars are also on a decline as they face double problems due to a possible economic slowdown in China after the tariffs get hiked and because of the deteriorating market sentiment. The USD, on the other hand, is pretty steady, while the JPY keeps climbing higher as a safe haven asset. 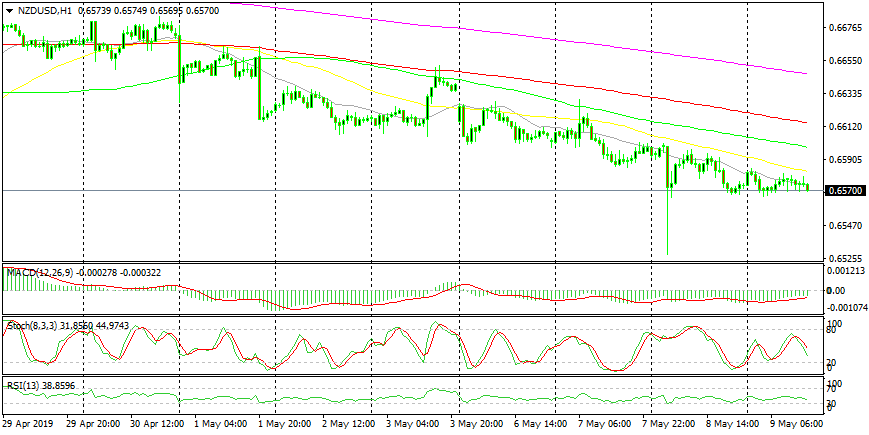 The 20 SMA is now providing resistance

The situation in this pair continues to be the same since it turned bearish last Wednesday. The pressure remains to the downside and the price made new lows after the Reserve Bank of New Zealand made a surprise rate cut yesterday in the Asian session. Buyers have tried to reverse the price but the attempts have been pretty pathetic and the downtrend continues as the 20 SMA (grey) keeps pushing this pair lower while the 50 SMA (yellow) stands ready to provide resistance above.

Another boring day with very slow price action in financial markets today. The Chinese delegation is in the US and they will begin talks which will last two days. That’s a short negotiation period, which is a sign that we might still be far from a trade deal, especially after China backtracked on promises and the US threatened with more sanctions. But, let’s not be too judgmental.