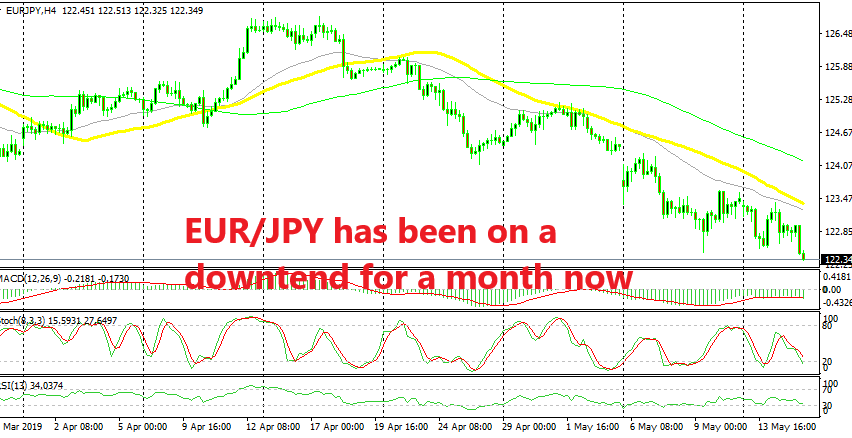 The bearish trend resumed after the pullback yesterday

EUR/JPY has been on a bearish trend for about a month now after being on a bullish trend for the first two months of this year and consolidating in the following two months. But the Euro started turning bearish by the middle of April after the Eurozone and German manufacturing were confirmed to be in deep contraction. Then the JPY started turning bullish last week, which stretched the downtrend further below for this pair.

The 50 SMA (yellow) provided resistance once two weeks ago for this pair during the bearish period and since then, the 20 SMA has been providing resistance. This means that the selling pressure and the downtrend are quite strong. We saw a retrace higher yesterday, but it ended just below the 20 SMA again.

The price formed a doji candlestick below that moving average which is a reversing signal and the stochastic indicator was almost overbought on the H4 time-frame chart. So, the bearish reversing pattern was pretty clear and the reverse came soon after that.

We were short on USD/JPY and didn’t want to get too exposed on the JPY pairs, so we stayed out. But, we are bearish on this pair and will wait for another retrace higher in order to sell this pair. A similar reversing chart setup like yesterday would be great, but we have to wait since this pair is still declining.