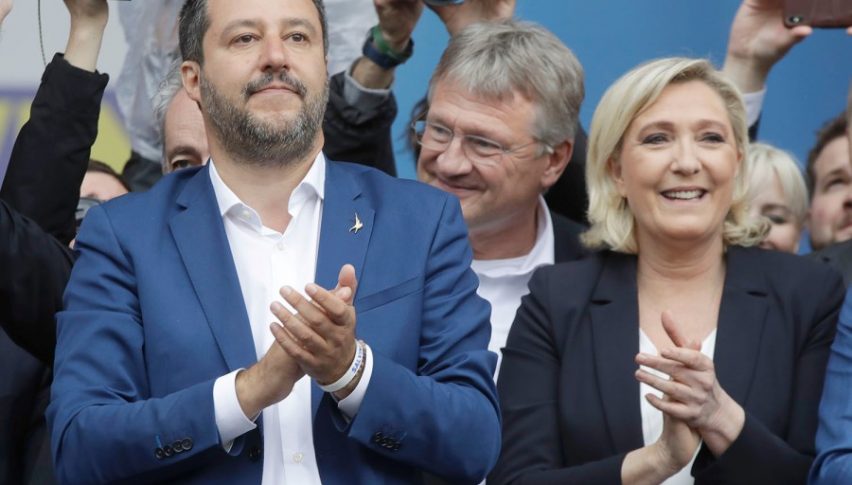 US Session Forex Brief, May 27 – Quiet Markets After European Elections

The markets have been pretty quiet today. The UK is off due to the Spring Bank Holiday while the US is off for Memorial Day, and this is affecting financial markets today. As a result, the price action has been pretty slow, apart from a jump in Auto stock shares which came after Fiat Chrysler announced a proposal for a merger with Renault. Cryptocurrencies have also been on the move today with BITCOIN climbing more than $1,000 higher, placing the spotlight on the $10,000 level now, which will be the decisive level for Bitcoin.

Although, the main event which is still ongoing has been the elections in Europe. The wright wing/nationalist parties have been gaining support across Europe in the last several years and they were hoping to take a big chunk of the seats in the European Parliament which they did. Matteo Salvini took most of the votes in Italy and he is already pushing to renegotiate the debt ceiling with the European Commission which he said will be more friendly to Italy. As I mentioned in the weekend article, this might actually turn out to be a positive thing for Italy in particular since it was having a tough time with the EU regarding the deficit. In France, Marie Le Pen won while in Britain it was Nigel Farrage’s Brexit party which took most of the votes. That’s no surprise after a lengthy and messy Brexit. So, the political landscape is shifting in Europe after Brexit and Trump’s win three years ago.

The price reversed at the 50 SMA today

GBP/USD has been pretty bearish for the last two weeks, losing nearly 600 pips as it turned down. Britain is heading towards Brexit with no deal, Theresa May is leaving, and the economy is pretty weak, so fundamentals look pretty bleak in the UK. But there was a retrace higher during the few days, which ended at the 50 SMA (yellow). The price turned back down but was finding support at the 20 SMA on the H4 chart, which now looks like it is being broken.

It seems now that Donald Trump might try to open another trade war, this time with Japan, after comments that the US has a wide trade gap with Japan. But, we’ll see how it goes because Japan’s fighting spirit has been killed in WW2. The European elections are over as well and the populist parties are the biggest winners, so let’s see how the political landscape changes in Europe now.