Crude Oil Heading Towards the Resistance at $50, Despite OPEC+ Planning to Extend Production Cuts - Forex News by FX Leaders 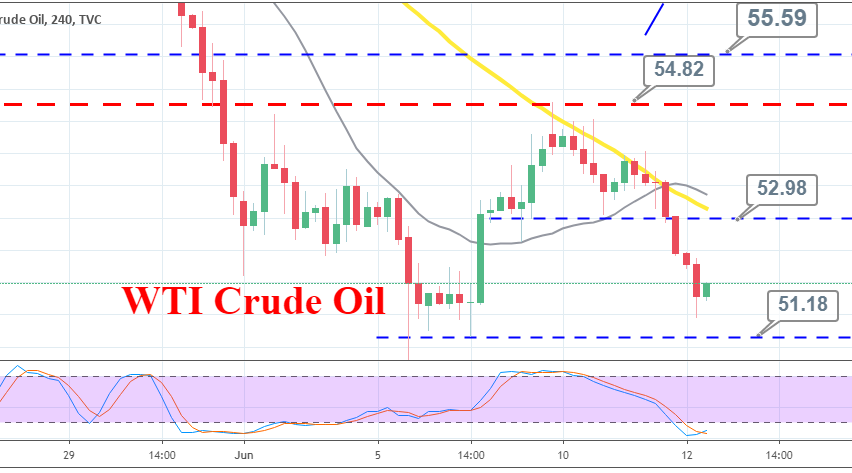 Crude Oil Heading Towards the Resistance at $50, Despite OPEC+ Planning to Extend Production Cuts

US Crude Oil now heading towards the $50 level

Crude Oil has turned bearish in the last couple of months after enjoying some jolly good times in the first three months of this year on the back of production cuts from the OPEC+ cartel. But, the sentiment has reversed for Oil and Crude Oil is taking it from both sides. The deteriorating sentiment due to the escalating trade war is hurting risk assets such as WTI crude, while on the other hand, the global economy has slowed considerably and is showing no signs of a reversal, which lowers the demand for energy products.

As a result, Crude Oil has been on a bearish trend for weeks now and at a point, it fell pretty close to the big round level at $50. The price bounced higher off that support area last week as rumours from OPEC+ suggested that the cartel will extend the production cuts further, and so a support area has formed for the US WTI crude.

The price bounced nearly $5 higher last week, but the buyers couldn’t push above the 50 SMA (yellow) on the H4 chart. They pierced the 50 SMA several times, but couldn’t hold the price above it for a candlestick to close there, which would confirm the break. But the break never came and the 50 SMA kept pushing Crude Oil lower until today when Oil turned pretty bearish again in the Asian and the European sessions.

Perhaps, the protests in Hong Kong are hurting the sentiment again in financial markets, as we see USD/JPY also diving lower today. Now, US WTI Oil faces the first support at $51 and then the big support area at $50. OPEC still plans to extend the output cuts, but the other fundamental factors seem to have a stronger impact on Oil, so if the trade war continues and the global economy keeps weakening, then the fate of Crude Oil is sealed to the downside.