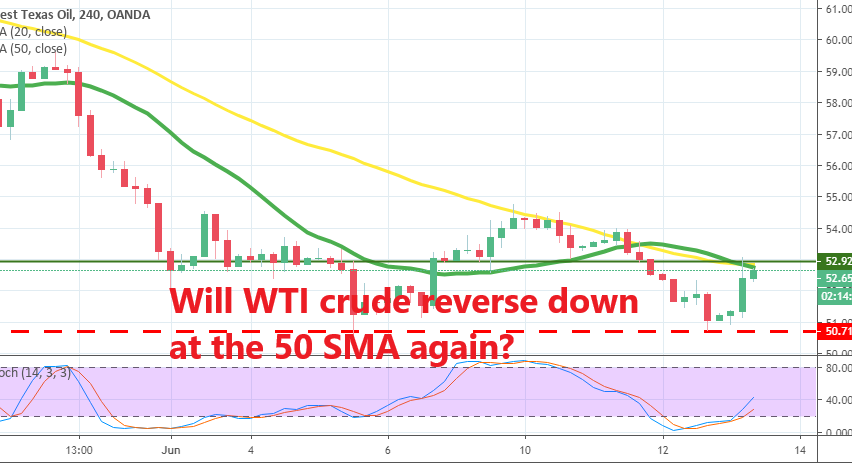 Oil Bounces Off the Support on Iran Oil Tanker Attacks, but the Overall Picture Remains Bearish

Crude Oil has formed a base above $50

Crude Oil has been pretty bearish since it started to reverse down from $66.50s earlier this year. The increasing trade tensions and the slowing global economy has weakened the demand for energy products such as crude Oil. As a result, US WTI crude has broken support after support but it has formed a new support area above the $50 level, which stretches up to $50.50-60s.

We saw US Crude Oil bounce higher off that support area last week but it found solid resistance at the 50 SMA (yellow) on the H4 time-frame which kept pushing the price down and eventually turned Oil bearish again this week. But Oil found support at the same support area yesterday and overnight we saw it bounce higher.

The bounce was due to an explosion of Iran Oil tankers which Iran says it’s an attack. Here is the tweet from Iran’s Oil Minister Javad Zarif:

That helped Oil prices move more than $2 higher this morning, which means around 4% climb for US WTI crude. But now Crude Oil is facing the 50 SMA again and the 100 SMA comes at the same level at the moment, which is also helping provide resistance. So, the technical picture is still bearish as is the fundamental picture which OPEC paints clearly in its monthly report released a while ago.

OPEC is acknowledging the inability to keep prices increasing as the global economy slows down. Despite sanctions in Venezuela and Iran and the supply cut from OPEC+ cartel, inventories keep building up and Oil prices keep falling as we have seen in the last couple of months.

Will We See A Pullback in Ripple (XRP) This Week?
2 hours ago