US Session Forex Brief, June 20 – The Bank of England Remains Dovish on the Economy - Forex News by FX Leaders

US Session Forex Brief, June 20 – The Bank of England Remains Dovish on the Economy

Yesterday was finally the time for the FED meeting that everyone was waiting for. Certain sectors of the US economy have weakened considerably in the last few months, suggesting that the US economy is catching up with the rest of the globe in this economic slowdown that has set foot in all developed counties. As a result, the odds of a rate cut in July increased to nearly 90% in the last few weeks and today after the FED meeting, those odds have gone up to 100%, which means that a rate cut is a done deal for next month. The USD turned dovish again and has been declining during the Asian and the European sessions today. On the other hand, safe havens are on the climb, with USD/JPY diving below 108 while GOLD broke lat year’s highs.

Today it was the turn for the Bank of England to turn bearish. The retail sales report from Britain released this morning showed a 0.5% in sales during May, while April was revised lower to -0.1%, which means two negative months in a row. There was no move expected in interest rates from the BOE today, but after rate cuts from a few major central banks recently, there was the possibility of the BOE delivering a surprising rate cut, but they didn’t. Instead, they sounded increasingly dovish regarding economic growth, which has turned the GBP bearish in the last couple of hours. So, all major central banks are dovish now. 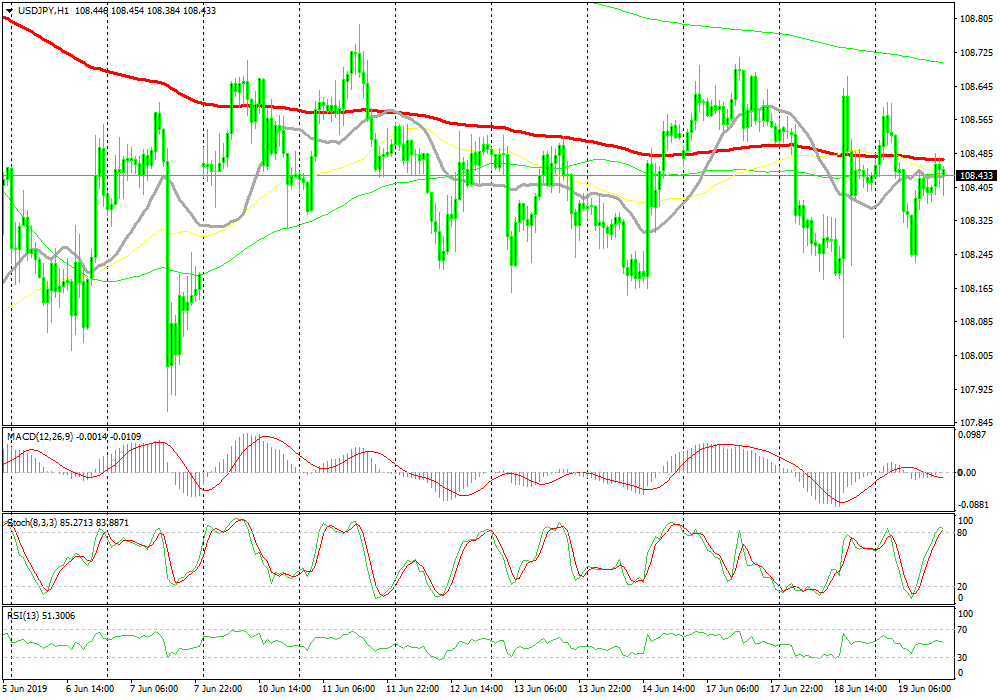 The price is reversing at the 100 SMA

USD/JPY has been bearish for a couple of months now since it reversed down as the trade war escalated several weeks ago. The sentiment remains pretty negative across the markets which increases bids for safe havens such as the JPY. Overnight, this pair slipped lower but it retraced back up during the European session. But that retrace is complete now as stochastic indicator suggests. The 100 SMA (red) provided resistance earlier today and the previous candlestick closed as a doji which is a reversing signal. The reverse down is already happening, so we have a bearish bias for this pair.