Bitcoin surged by another 25 percent this week and reached all the way up to the $11,200 range. How far this rally goes and what the chances are of Bitcoin retracing will be found out by analyzing Bitcoin, Ethereum, XRP, and the total crypto market. 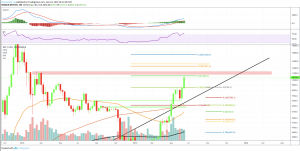 Bitcoin surpassed the 0.5 fib extension level at $11,000 and touched the resistance between $11,200 – $11,700, where the high from February 2018 is located. If Bitcoin manages to break this resistance, it will find its next target at around $13,000, where the golden ratio fib extension level acts as key resistance. With the RSI reaching overbought regions, a retracement should follow in the not-too-distant future. However, the MACD still indicates bullishness and the histogram is ticking higher. 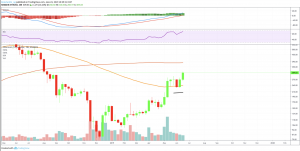 Ethereum surged another 20 percent after a bullish engulfing candle was formed in the previous week, which indicated further upward movement. The 100-week-EMA at $370 acts as major resistance, where it is likely to start correcting towards the downside. For now, Ethereum will most likely follow the price hike of Bitcoin and increase further, as the RSI is not yet touching overbought regions and the MACD remains bullish as well. 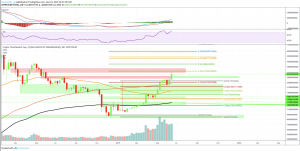 The cryptocurrency market rose by 24 percent this week and even surpassed the resistance between $275b – $295b as well as the $300b mark, which now turned into support. With the RSI reaching overbought regions, a retracement should follow very soon. The cryptocurrency market finds its next resistance at $330b – $360b while its next support is located at around $275b and the major support is found between $180b – $220b. 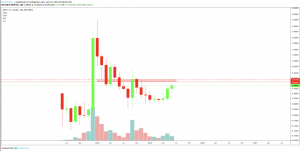 XRP surged by 22 percent this week and for now, it seems likely that XRP is continuing its uptrend towards the major resistance at around $0.55. Its next support is located at $0.44.

The biggest gainers of this week were
BEAM, which gained by 71 percent,
TNT, which surged by 85 percent and
EGT, which rose by 73 percent and by 9700 percent since the start of 2019.

Last week’s biggest news was that Facebook announced that it will launch its own cryptocurrency by 2020 called Libra and that Moneygram has partnered with Ripple to use its transaction software xRapid.

Tokyo on Becoming a Crypto-powered Financial Hub
10 hours ago