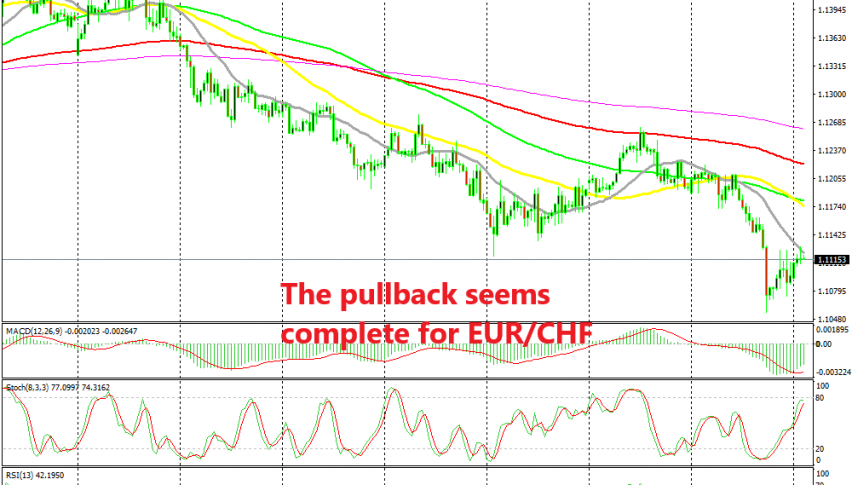 The 20 SMA is providing resistance for EUR/CHF again

EUR/CHF turned pretty bearish in May after the global economic slowdown was confirmed at the start of Q2 and the sentiment turned negative. The escalation of the trade war back then also had a big impact on the market sentiment and the safe haven assets such as GOLD, the JPY and the CHF, all of which have turned quite bullish since then.

As a result, EUR/CHF turned bearish last month and lost more than 300 pips. But the Swiss National Bank came to the rescue, threatening to intervene if the decline in this pair continued and during the first week of June, the price turned bullish. Although, that wasn’t going to last because things are deteriorating instead of getting better.

There’s no solution in sight for this trade war, with both parties standing firm on their positions, while the global economy continues to weaken. Other geopolitical events are adding more fuel to the rally of safe havens, so they have turned bullish again since the middle of last week and are extending the uptrend.

EUR/CHF found resistance at the 100 SMA (red) on the H4 chart last week before turning bearish again. The 50 SMA (yellow) provided some support but it was eventually broken and towards the end of the week, the downtrend picked up pace further after the FED turned pretty dovish. EUR/CHF broke below the previous low. Although, it has been retracing in the last few trading sessions and has reached the 20 SMA (grey) now.

This moving average tends to turn into resistance when the trend is strong, such as at the beginning of May. Now the downtrend has picked up pace again and we think that the 20 SMA will provide resistance again. Stochastic is overbought and the previous H4 candlestick formed a doji which is a reversing signal, so the chart formation is pointing to a bearish reversal, hence our sell signal in this pair a while ago.