The FED Didn't Care Much For Today's Statements From Mnuchin.

The main theme of the last several weeks in financial markets has been the negative sentiment which was a result of a number of factors, such as the increased weakness of the global economy, the escalating trade war and growing geopolitical tensions. Most of these factors are pretty much alive, but we heard some positive comments from the US Treasury secretary, Steven Mnuchin, who was speaking to the CNBC, saying that 90% of the trade deal with China is done.

That has improved the sentiment today and safe havens have been on the retreat during the European session. Although, that 10% of the agreement where the two parties haven’t met yet, that’s what really matters. It’s like when UK politicians were 95% sure that the Brexit deal was a done thing. So, I think that it is too early to be optimistic about a US-China trade deal. But markets have been dovish for so long that any positive comment is taken at face value.

The US durable goods orders report was released a while ago and they showed another major decline of 1.3% for May, making this the third big decline in durables in the last four months. But there’s a catch; core orders increased by 0.3% instead and capital goods orders increased by 0.7% last month. Both these numbers exclude orders for aircraft and aircraft parts. Also, Boeing orders fell by 50% last month due to the crashes we have seen in the last several months, which means that actually, the durable goods report was quite positive. 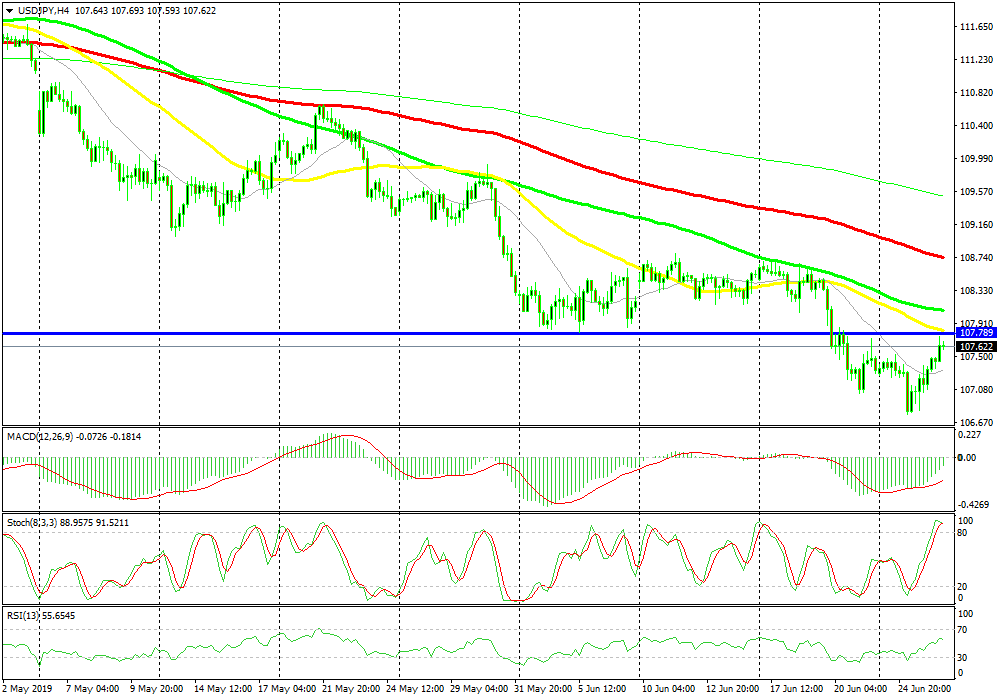 Stochastic is now overbought on the H4 chart

USD/JPY has been on a bearish trend for nearly two months now, losing more than 500 pips from top to bottom. This week we saw this pair make new lows, but the price has been retracing higher since late US session yesterday. Although, the buyers seems to have difficulties pushing above 107.70s which used to be the low tow weeks ago, and now the previous support seems to be turning into resistance. The 50 SMA (yellow) and the 100 SMA (green) are also catching up with the price and they will likely provide resistance and push the price lower again, so we are short on this pair since a few hours ago.

As we mentioned above, the sentiment improved considerably today after Mnuchin’s comments about the trade deal being 90% complete. But, the decline in safe havens has stopped in the last few hours as has the climb in risk assets. That 10% includes IP theft and a closed domestic market in China, which are the main things where the two parties divide. So, the deal is as far from being complete now as it was a month ago.