GBP/USD Turns Bearish at the 50 Daily SMA and Heads for 1.25 as BoJo Hints at No-Deal Brexit - Forex News by FX Leaders 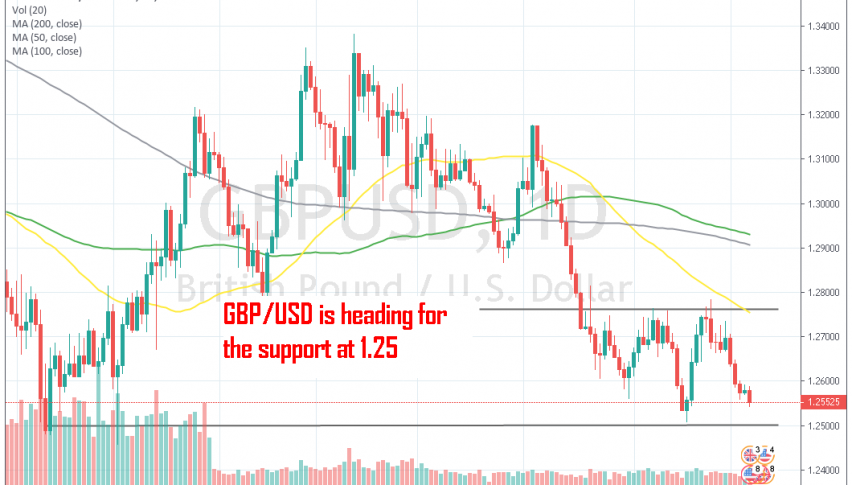 GBP/USD Turns Bearish at the 50 Daily SMA and Heads for 1.25 as BoJo Hints at No-Deal Brexit

GBP/USD has traded in a range, roughly between 1.25 at the bottom and 1.2750 at the top for the past several weeks. Although on Monday last week, the price formed a doji candlestick on the daily chart which is a reversing signal and after that, the bearish reversal came and this pair has been bearish since then, losing around 200 pips since then.

The 50 SMA (yellow) was also approaching on the daily chart, which scared the buyers as well, so the reversal came. Now, this pair is heading towards the big round level at 1.25 which also offers a strong support area around it, which usually comes with a buffer zone, stretching from 1.2550s to 1.25450s more or less.

The fundamentals are not helping the GBP either as odds of an orderly Bexit keep diminishing. Just a while ago, the leading candidate for the Conservative Party and the post of the UK Prime Minister Boris Johnson (BoJo) said that the UK will be totally ready for a no-deal Brexit by 31 October. He continued:

He did say that he wants a better Brexi deal, but I don’t think Britain can get anything better substantially. The EU can offer some facial makeup but that’s about it, I reckon, because they exhausted all other options in the last two years and didn’t come to a conclusion. So, the GBP is set to be bearish for the weeks/months to come and this time the 1.25 level might be broken for good, but let’s see.

Skerdian Meta // Lead Analyst
Skerdian Meta Lead Analyst. Skerdian is a professional Forex trader and a market analyst. He has been actively engaged in market analysis for the past 11 years. Before becoming our head analyst, Skerdian served as a trader and market analyst in Saxo Bank's local branch, Aksioner. Skerdian specialized in experimenting with developing models and hands-on trading. Skerdian has a masters degree in finance and investment.
Related Articles
Weekly Outlook, Jan 25 - 29, 2021: Top Economic Events to Watch This Week
The broad-based U.S. dollar is going to end this week on the bearish track as traders continue to cheer the Joe Biden administration's inaug
17 hours ago