USD/JPY Buyers Struggling to Break the Resistance at 108.60-70 - Forex News by FX Leaders 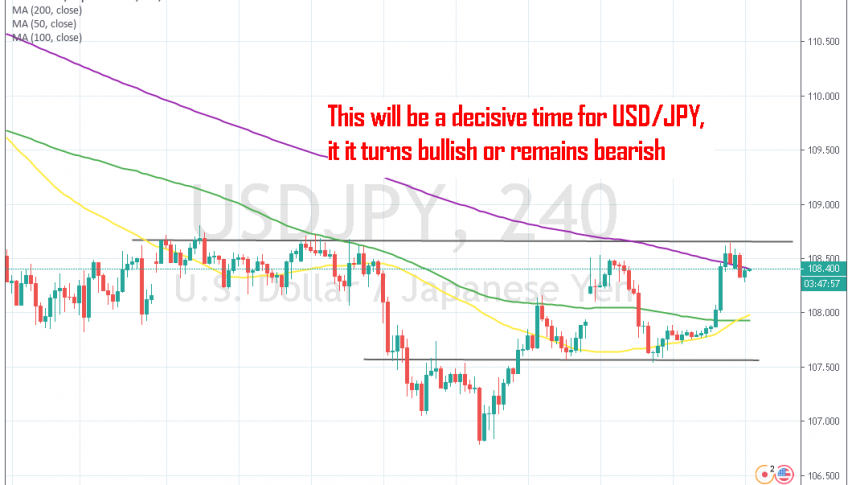 USD/JPY Buyers Struggling to Break the Resistance at 108.60-70

USD/JPY is trying to make its mind up now

USD/JPY has been on a strong bearish trend during the last two months as the sentiment in financial markets turned really negative. The sellers were in total control during May and June and the price pushed below 107 for several days. We opened quite a few sell signals in this pair during that time, most of which went pretty smoothly as sellers kept pushing lower.

But, the downtrend stopped in the last week of June, ahead of the G20 summit, as markets were expecting a positive summit, which is how it turned out to be eventually. Although, the positive comments we heard from there are still just words for the time being, they were enough to improve the sentiment, especially for the USD.

So, USD/JPY has been climbing higher in the last two weeks and it broke the 50 SMA (yellow) and the 100 SMA (green) which had been providing resistance on the way down. But, the buyers are having trouble overcoming the 200 SMA (purple) on the H4 chart. They pushed above it late last Friday, but the price has been trading below and above it since then, so the break is not clear yet.

Besides that, the area around 108.60-70 is also a resistance zone for this pair as you can see from the chart above, so it has been a bit of a struggle for buyers. This level will determine whether USD/JPY stays bearish on the longer term charts or if it finally turns bullish. If the price holds above the 200 SMA, then there’s a good chance that the buyers will push above the resistance area, but we have to wait and see in the coming few sessions.