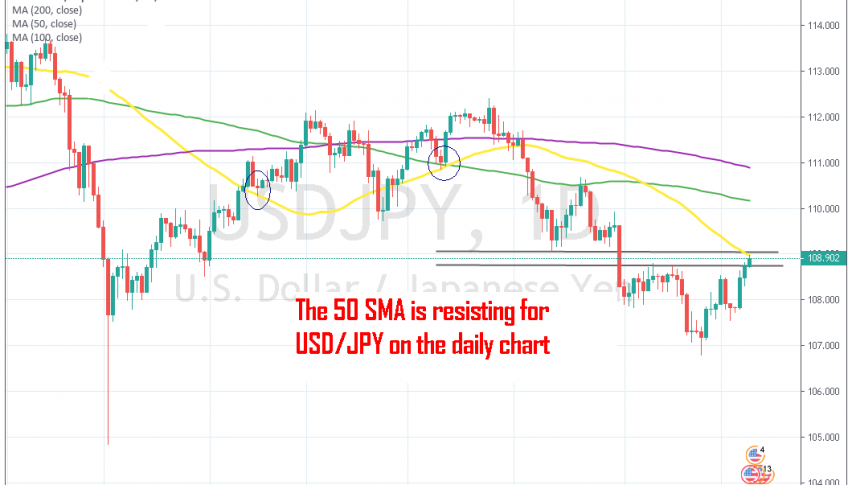 The climb is overdone for the moment

USD/JPY turned pretty bearish at the end of April after the trade war escalated and the global economy slowed, which hurt the sentiment in financial markets, sending safe-haven assets such as Gold and the JPY higher. This pair lost more than 500 pips during that time, but the sentiment has improved in the last three weeks, which means trouble for safe havens. GOLD has fallen below the $1,400 level and we made some nice pips with our sell signals in Gold yesterday.

As a result, USD/JPY turned bullish two weeks ago from below 107, but it didn’t manage to push above the resistance level which comes at around 108.70s, so there were doubts whether this pair was really turning bullish or if this was just a retrace higher before the sellers returned and the bearish trend of the last few months resumed again.

Today, that resistance level has been broken, but the buyers are running against the 50 SMA (yellow). This moving average used to provide support when this pair was bullish during Q1 this year and normally, the support indicators turn into resistance and vice versa. The 50 SMA comes just below 109 and a few pips above the 109 level we also have the swing low from May.

These two indicators make this area a decent resistance zone, so it will be a bit tough to push above this zone. Although, I think that we will see a pullback lower before the break higher since the 50 SMA is already rejecting the price at the moment. So, despite the bullish move of the recent few weeks, I will sell this pair with a tight stop above 109, hoping to get some pips on a retrace lower before the bulls return again.