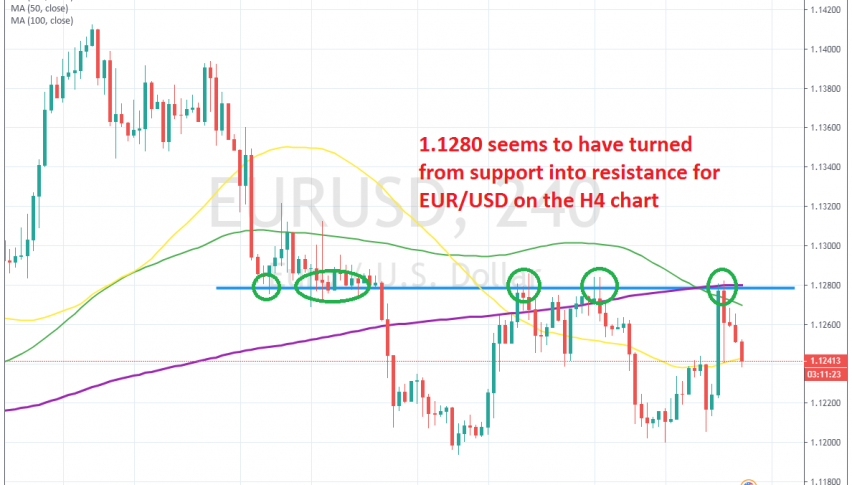 1.1280 Turns Into Strong Resistance for EUR/USD as Yesterday’s Surge Stopped There Again

Last evening the USD made a bullish reversal and it tumbled lower. The reason for that decline were comments from the New York FED president Williams who said that the FED needs to step in aggressively. Traders got the idea that the FED might cut interest rates by 50 basis points this month, more than the 0.25% that was the consensus previously, so the USD fell through an air pocket.

EUR/USD surged 80 pips higher after bouncing off the support area above 1.12. Buyers kept buying until the price reached the 200 SMA (purple) on the H4 time-frame which provided resistance for this pair, despite being pierced briefly. Although the push above the 200 SMA doesn’t count as a break because the price retreated back below the 200 SMA quickly and the candlestick didn’t close above it.

The main reason that the surge ended is the 1.1280 level in itself. This area provided support on the way down in the first week of this month and then turned into resistance last week. 1.1280 held as resistance yesterday again and EUR/USD is now slipping lower.

Just a while ago, we heard FED’s Bullard say that a 25 bps rate cut this month would be appropriate, which means that we’re back where we were yesterday before Williams’ comments. So, this pair should remain bearish now; although, we missed the chance to sell this pair at the 200 SMA.

EUR/USD Bounces Off MAs Again Today, After the Jump in the Eurozone ZEW Economic Sentiment
9 hours ago