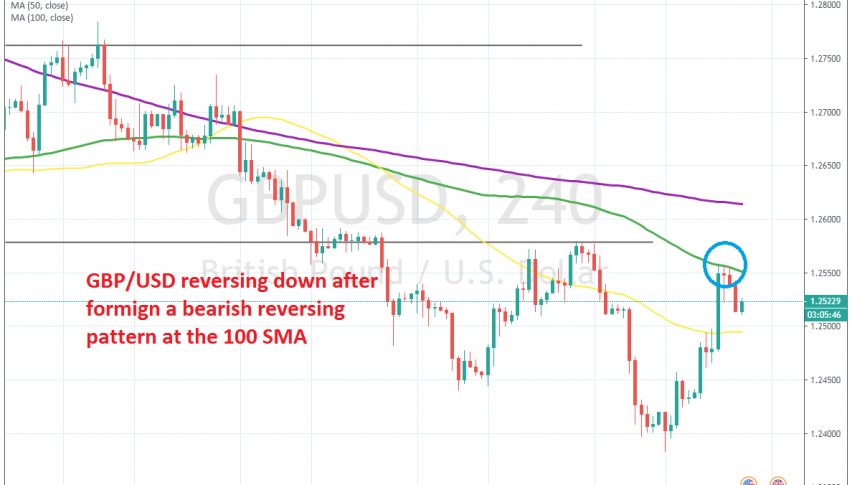 The 100 SMA held as resistance this time

The last two weeks have been quite similar for GBP/USD. This pair began trading last week on a bearish foot, following the bearish momentum of the previous two weeks and it broke below the big round support level at 1.25 on Monday last week, which was the first time the sellers pushed below this level in a long time.

But, it reversed higher by the middle of last week following Powell’s dovish remarks during the testimony at the US Congress and this pair ended the week on a bullish foot. Although in the last day of last week we saw a rejection from the 1.2580 level and last Friday was a bearish day for GBP/USD.

The bearish momentum continued on Monday this week and GBP/USD broke below 1.25 again, as well as below 1.24. it seemed like the sellers would now remain in control forever, but towards the middle of the week we saw another bullish reversal. Buyers pushed up to 1.25, where this pair found resistance yesterday, aided by the 50 SMA (yellow) as well on the H4 chart.

But, Williams’ comments last evening for a more aggressive approach this month from the FED, which suggested that a 50bps rate cut might be coming in the next meeting, sent the Buck diving and this pair broke above 1.25 as a result. GBP/USD surged to 1.2560 after that, but it stopped right at the 100 SMA (green) on the H4 time-frame chart.

The climb stopped there and, after forming a doji candlestick which is a reversing signal, the price began to slide lower. Right now, the buyers are pushing back up again slowly, but if we see signs of weakness around the 100 SMA again at 1.2550-60, then we might go short on this pair up there.