EUR/USD Heads for the Ultimate Support at 1.11 After Manufacturing Disappoints - Forex News by FX Leaders 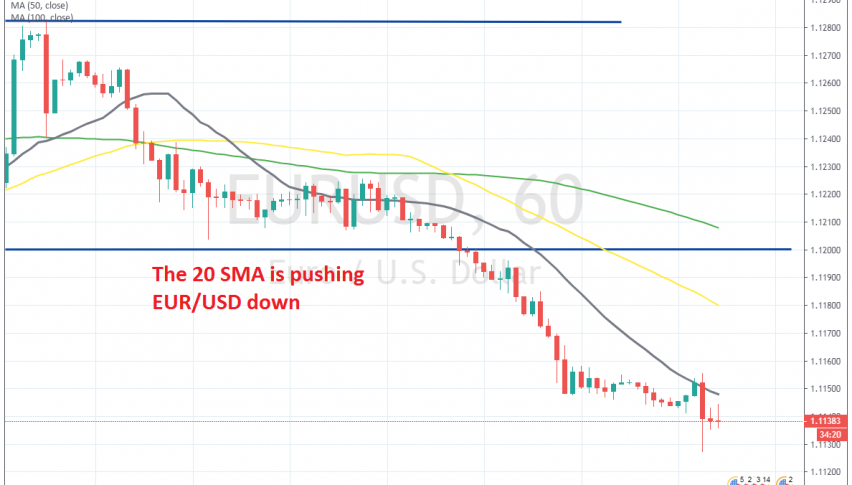 EUR/USD Heads for the Ultimate Support at 1.11 After Manufacturing Disappoints

The support at 1.11 will likely be broken this time

Manufacturing has been in recession in the Eurozone as well and today the recession deepened further as the PMI indicator fell to 46.4 points from 47.6 points in June. Services also cooled off in the Eurozone to 53.3 points form 53.6 points last month, but it’s still expanding at least.

EUR/USD has been on a bearish trend in the last several days and it lost around 50 pips yesterday. This morning the price was consolidating ahead of the economic data, and the downtrend resumed again after the reports were released. The 20 SMA (grey) caught up with the price just before the manufacturing figures were released and then it pushed this pair lower after the horrible figures from Germany and he Eurozone.

Now we are approaching the ultimate support level at 1.11 and I think that this time the sellers will finally break this level. Although, we might see some sideways trading until tomorrow when the European Central Bank finally sends the Euro tumbling, judging by the recent economic data which has been really weak, such as today.

Markets Looking For A Reason to Sell the USD, As the FED Looks For Any Reason to Stay Loose
11 hours ago