GBP/USD Trading Between 2 MAs, Trying to Make its Mind Up After the Election of the New PM - Forex News by FX Leaders 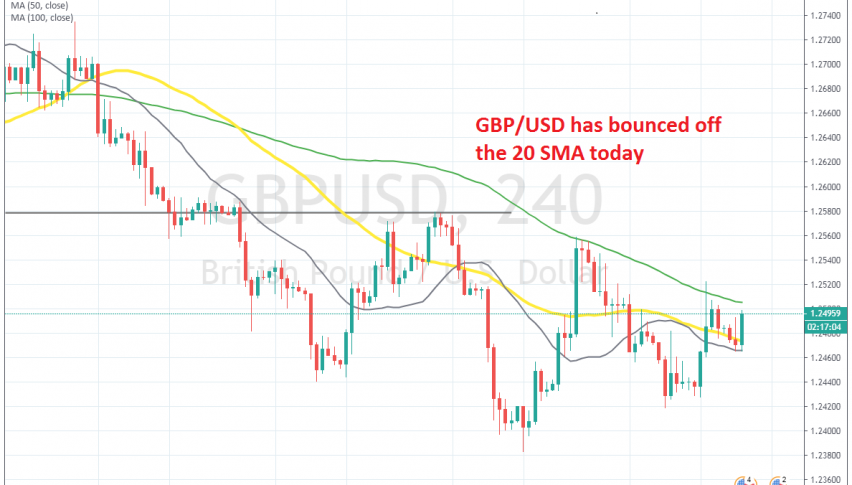 GBP/USD Trading Between 2 MAs, Trying to Make its Mind Up After the Election of the New PM

GBP/USD is stuck between moving averages

GBP/USD turned bullish last week after the dovish remarks that FED chairman Jerome Powell made at the US Congress during his testimony. But, it found strong resistance at the 100 SMA (green) on the H4 chart and reversed down this week, ahead of the election at the UK Conservative Party, which was the election for the Prime Minister as well.

Although, we saw another surge yesterday, taking this pair around 100 pips higher. The price pierced the 100 SMA briefly, but it pulled back below it again, so that doesn’t count as a break. Although, sellers haven’t been able to get their way because the 50 SMA (yellow) and the 20 SMA (grey)have been providing support for this pair since yesterday.

Today we saw another jump higher and now the price is headed for the 100 SMA again. Although, it remains to be seen if the buyers will finally break it, because the uncertainty is still elevated after Boris Johnson took the Prime Minister office. But the EU is not offering anything more regarding Brexit. So, we might open a sell signal at the 100 SMA if we see signs of weakness.