The Greenback Is Holding On To Slight Gains Ahead Of The FOMC Interest Rate Announcement.

Yesterday, the European Central Bank held its meeting and they sounded pretty dovish. But, markets were anticipating that, considering the weak economic data of the recent months from the Eurozone. What traders were hoping for this time, was a set date for a broader stimulus package, such as rate cuts and QE. Westpac expects the ECB to introdyce such a package in their September meeting, but markets wanted to hear that from the ECB, which they didn’t and as a result, the Euro climbed around 60 pips higher.

Today markets are concentrated mostly on the GBP and USD. We have been hearing comments from French, German,  and other EU officials today that the Brexit the withdrawal agreement won’t be reopened and the Irish border backstop won’t be removed. GBP traders were hoping for something more now that Boris Johnson is the new Prime Minister of Britain, but the rejection from the EU has sent the GBP sliding lower today.

Although, the main thing in traders’ mind today is the GDP report from the US. The US economy has weakened considerably in Q2 of this year, so the GDP is expected to come down to 1.8% in Q2 from 3.1% in Q1. But, we might get a surprise, which would send the USD higher, so USD traders have been waiting on the sidelines. 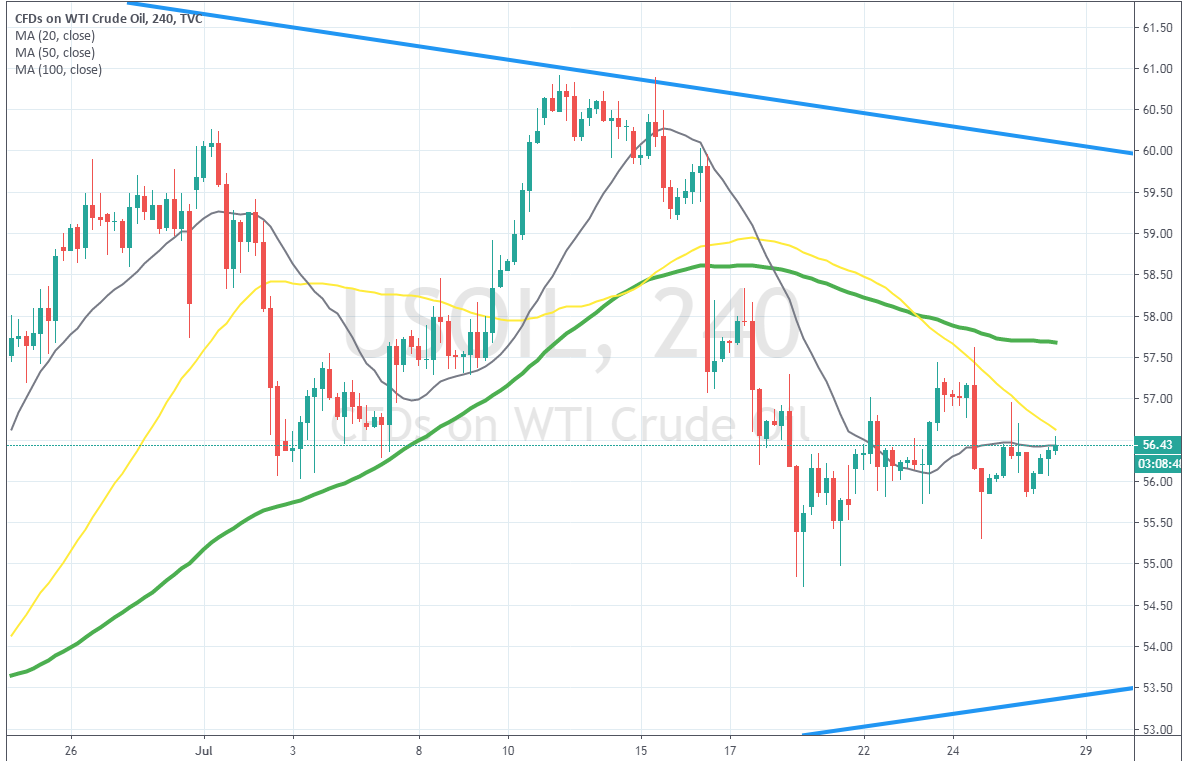 The 50 SMA is providing resistance for WTI crude

US WTI crude Oil turned bearish last week, falling from around $61 to below $55. This week we have seen a retrace higher but the 50 SMA is providing solid resistance, turning the price lower on Wednesday and again yesterday after the retraces higher. Now the price has retraced higher again and the 50 MA has slipped lower, which should turn the price lower again.

The US GDP report for Q2 will be released in a few minutes and traders are just waiting to get a clue from it. The FED meeting is next Wednesday when they are expected to cut interest rates, although markets still don’t know if the FED will enter a monetary easing period or just cut interest rates once this month. So, the GDP report will shed a little bit of light on that.

USD/CAD Continues the Decline, Despite the Retreat in Oil Prices
19 hours ago