The Bulls And Bears Are At A Near Stalemate Going Into The Weekend.

The sentiment turned pretty negative last Thursday after Donald Trump tweeted about extra tariffs on Chinese imports. China has argued that it has kept promises on buying US agricultural products, but we know there was a fallout in trade talks last week which took place in China, so the trade war is on again. The sentiment in financial markets deteriorated after those tweets, which has sent risk assets tumbling lower, while safe havens have been absolutely surging in the last few days. Gold made 6-year highs while USD/JPY tumbled 400 pips lower.

Although today the sentiment seems to have improved somewhat as commodity dollars continue the retrace higher which they started yesterday, while safe havens are retreating, with USD/JPY retracing more than 150 pips higher this morning during the Asian session. The reason for this has been the economic data coming out of Asia and Germany early today. The employment report from New Zealand was impressive with the unemployment rate losing 3 points while the earnings index rose by 0.8% in Q2. The German factory orders posted a nice jump for June, but the main data came form Japan with average earnings and household spending came out much better than expected. That improved the sentiment and markets are trying to decide right now whether to stay on positive mode or turn negative again. 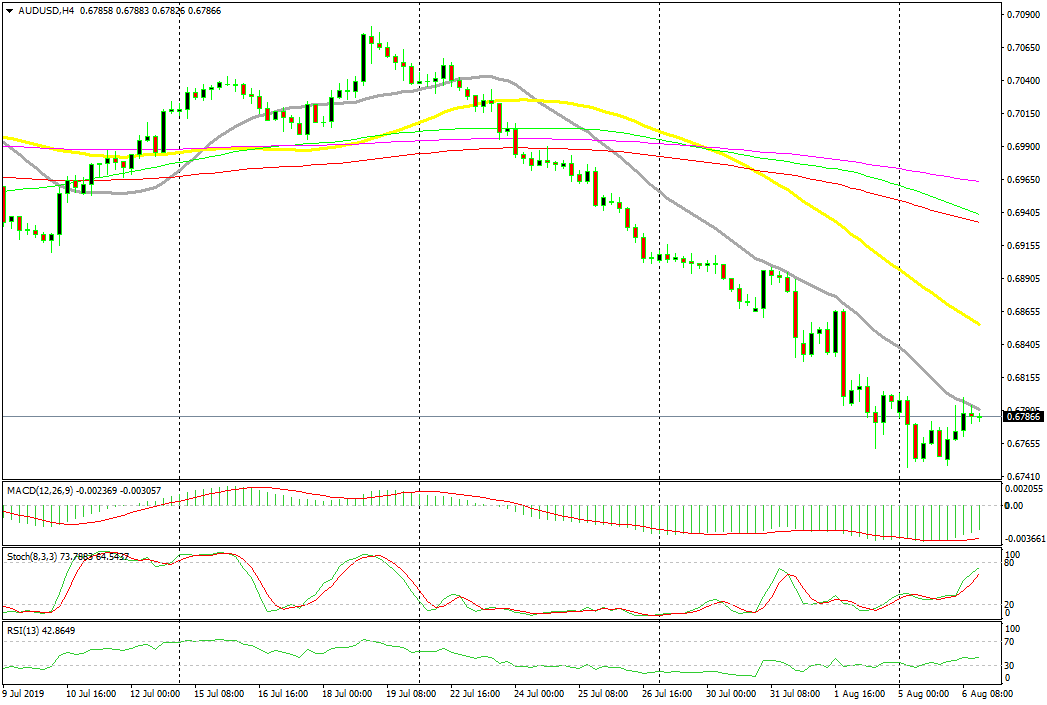 The 20 SMA is reversing this pair down again

AUD/USD turned bearish two weeks ago as the USD buyers returned and the trend has been pretty strong since then. the trend picked up further pace last week and yesterday it made new lows. But in the last few sessions the decline has stopped and we have seen a retrace higher take place as the USD weakens on the escalating trade war. But, the retrace is complete now with stochastic almost overbought and the 20 SMA (grey) providing resistance again. The previous H4 candlestick closed as a doji which is a reversing signal. We are already short on this pair from earlier on but if you missed that trade, this is a great opportunity to go short.

The factory orders made a jump in Germany in June and that’s a positive sign for the manufacturing sector in Germany and the Eurozone since this sector is in great trouble. Perhaps this will be the reversing point, but it’s still too early to tell since it’s just one good month. We should wait for the manufacturing data to come out this month from Europe.