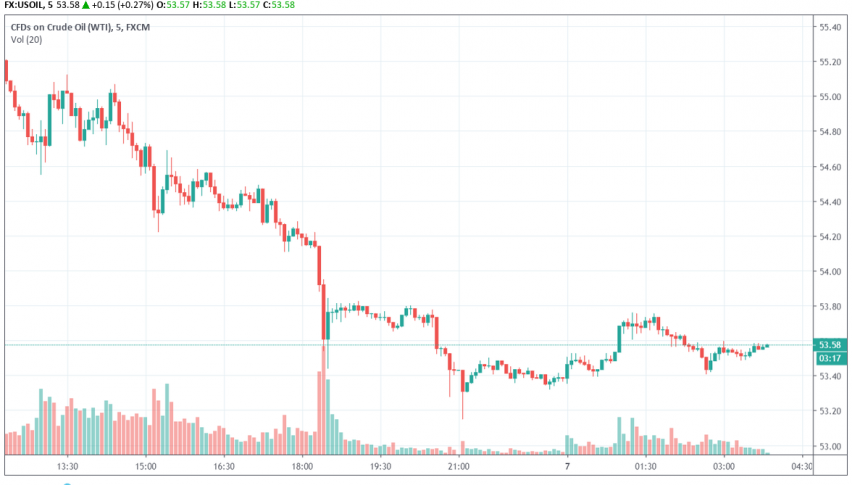 As the trade war between US and China continues to heat up, WTI crude oil prices continue to decline. Early on Wednesday, WTI crude oil is trading at around $53.58 per barrel.

Ever since Trump announced a new set of tariffs on Chinese imports, markets have been tense. While global equities have suffered, safe havens have been climbing higher. Amidst all this uncertainty, crude oil has been hit hard over concerns of falling demand for oil as economies get impacted by the fallout from the trade conflict.

However, WTI crude oil received some support from the API report which released on Tuesday. According to the report, US crude inventories fell by 3.4 million barrels to touch 439.6 million barrels during the previous week. Economists were expecting a decline of 2.8 million barrels.

In addition, the situation in the Middle East also continues to be tense over a recent spate of attacks on oil tankers passing through the Strait of Hormuz. This is also lending some support to crude oil prices over worries of potential supply disruption.

Arslan Butt // Index & Commodity Analyst
Arslan Butt is our Lead Commodities and Indices Analyst. Arslan is a professional market analyst and day trader. He holds an MBA in Behavioral Finance and is working towards his Ph.D. Before joining FX Leaders Arslan served as a senior analyst in a major brokerage firm. Arslan is also an experienced instructor and public speaker.
Related Articles
Crude Oil Extends Bullish Bias Amid Weaker Dollar - All Eyes on NFP Figures!
During Friday's Asian trading session, the WTI crude oil managed to extend its previous day winning streak & hit the 14-month high around we
16 hours ago