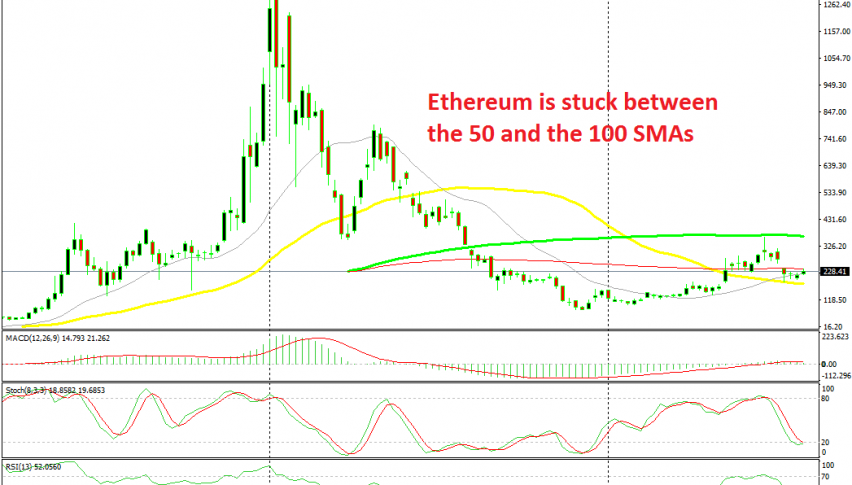 The bullish trend is pretty weak in Ethereum

Cryptocurrencies have made a swift reversal in Q2. They had a terrible year in 2018 after the gold rush for cryptos at the end of 2017, but in Q1 of this year, the long term decline stopped and digital currencies traded in a range, thus consolidating, with BITCOIN trading between $3,000 and $4,000 for a few months.

In Q2 though, the demand returned for cryptocurrencies. Bitcoin surged from $3,000 to below $14,000 while Litecoin has surged 700% from the bottom at $20 in Q1. Although, Ethereum has not been as bullish as the other major cryptos. ETHEREUM managed to push above a number of moving averages as cryptos were gaining momentum, but it failed to take out the 100 SMA (green) on the weekly chart.

The price found resistance at that moving average and it formed a doji candlestick below it which is a reversing signal. The price reversed down after that and now it seems like this altcoin is stuck between the 100 SMA at the top and the 50 SMA (yellow) at the bottom. This might be a good opportunity for buying Ethereum down here near the 50 SMA, but the fact that it has been lagging considerably behind the other major cryptos is worrying.

Bitcoin has turned bullish in the last several days after retracing lower last month, but it is not making any new highs and if cryptos turn bearish again, then Ethereum will be the most damaged by that, so we are staying on the sidelines for now.