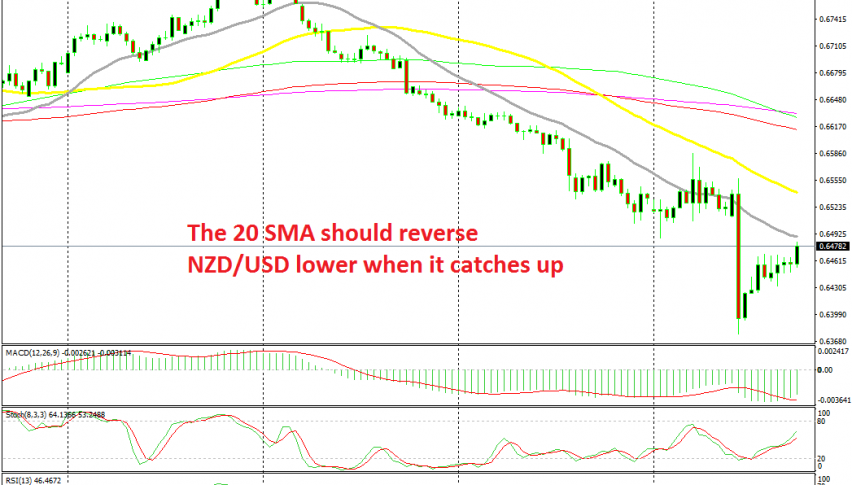 NZD/USD turned bearish about three weeks ago below 0.68, after it had been on a bullish trend for several weeks as the sentiment surrounding the USD improved. Commodity currencies turned bearish all together and NZD/USD has lost more than 400 pips from top to bottom.

The downtrend picked up pace further yesterday after the Reserve Bank of New Zealand cut interest rates by 50 basis points. That sort of move should have turned the Kiwi bullish because it means that the RBNZ would be done with slashing rates after a decent cut yesterday.

But, the RBNZ left the door open for more cuts as they mentioned in the press conference which is bound to keep the Kiwi bearish for the coming weeks or even months. But, after such a big decline in the last three weeks, a decent pullback lower would be due. The price started retracing higher in the European session yesterday and the price has climbed around 100 pips higher.

Now the retrace seems almost complete as stochastic heads towards the overbought area, while the 20 MSA (grey) is approaching. The 20 SMA has been providing resistance and pushing this pair lower in the last three weeks and it should reverse NZD/USD lower again once it reaches the price. We are Already short on this pair from lower, so we are waiting for the 20 SMA to kill this pullback and force NZD/USD resume the downtrend.