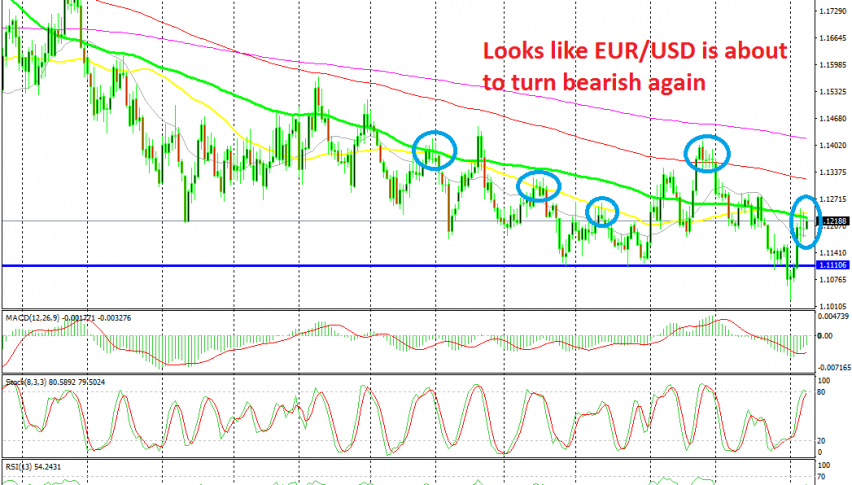 Another similar reversing pattern has formed

EUR/USD has been on a bearish trend for more than a year, since it reversed above 1.25 in April last year. The price fell to 1.11 lows on May, but sellers failed to push below that level, which turned into a support zone for this pair. In the last two months we saw a retrace higher take place for EUR/USD and the price climbed above 1.14 as markets were preparing for the FED to turn dovish after a series of negative economic data from the US.

But the FED cut rates just once by 25 bps last Wednesday, while the European Central Bank (ECB) sounded pretty dovish. Markets are now expecting the FED to remain on hold for the coming months, while the ECB is expected to cut rates further into negative territory and introduce another stimulus package.

EUR/USD broke below 1.11 finally and approach pretty close to 1.10 which is another big round level. But, Trump’s comments about more tariffs on China hurt the sentiment for the USD and the USD turned bearish, sending this pair higher. Although, the price ran against the 100 SMA (green) on the daily chart on Tuesday where it found resistance.

The daily candlestick closed as a doji that day, which is a reversing signal after the pullback higher. Stochastic is also overbought which means that the retrace is complete on the daily time-frame. The fundamental is also pretty bearish for the Euro with the ECB expected to start pumping money again soon, so a bearish reversal is due for this pair.