GBP/USD Heads for 1.20 After the GDP Report, with the 50 SMA Pushing it Lower - Forex News by FX Leaders 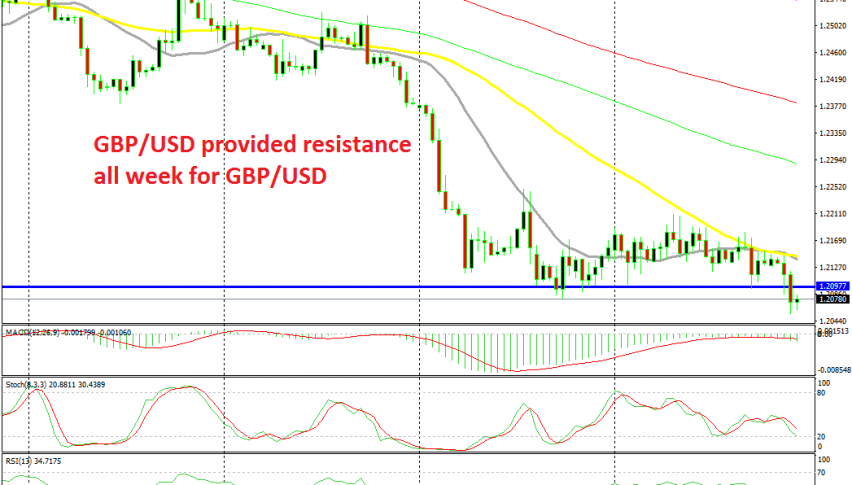 GBP/USD Heads for 1.20 After the GDP Report, with the 50 SMA Pushing it Lower

GBP/USD turned bearish at the end of July after the election of Boris Johnson as Prime Minister. This pair lost more than 400 pips in about a week, but in the last two weeks, we have seen the price consolidate in a range between 1.21 and 1.22, until today when the range was broken.

The price found resistance at the 20 SMA (grey) in the first retrace higher after placing the new low below 1.21 last week, but that moving average was broken this week. Although, buyers couldn’t push too high, especially since the 50 SMA (yellow) caught up with the price.

The 50 SMA caught up earlier this week and it has been providing resistance all week, pushing the price down as it moved lower. Today, the UK GDP report showed a 0.2% contraction in the last quarter and that was the trigger to turn GBP/USD bearish again.

The rest of the data was really weak as well, with construction output, industrial production and business investment also declining. The price slipped below 1.21 again and headed for 1.20. Now, the 1.21 level should turn into resistance. 1.20 is in danger now, but I think that the next bearish move will come when the 50 SMA catches up with the price again and that’s when the big level at 1.20 will likely go.