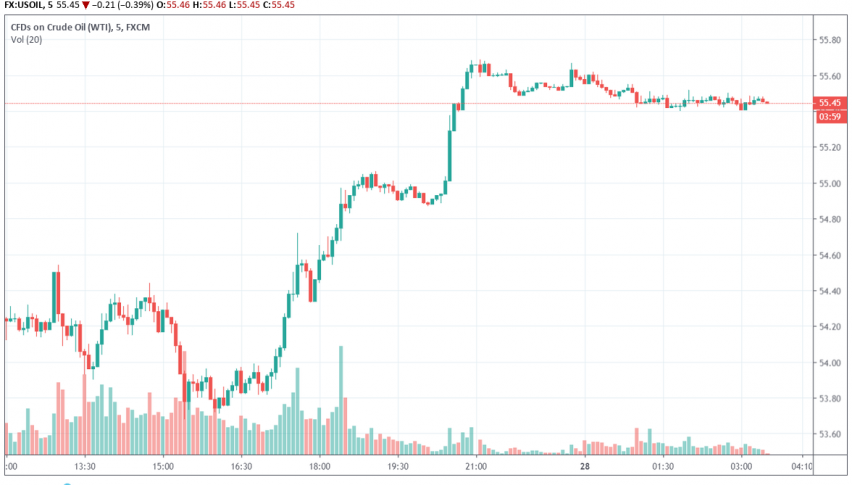 WTI Crude Oil Gains 1% After the Release of API Report

Early on Wednesday, WTI crude oil prices are climbing following the release of the API report in the previous session. At the time of writing, WTI crude oil is trading at around $55.45 per barrel, gaining 1% over a greater than expected decline in US crude stockpiles.

According to the API report which released on Tuesday, US crude stockpiles registered a sharp decline during the previous week, falling by 11.1 million barrels. Economists were expecting a draw of 2 million barrels, and the high disparity in the final figures has helped crude oil turn bullish.

Over the past few days, oil markets have been trading with high uncertainty over increased expectations that the US economy and several other economies worldwide were headed for a recession. A global economic slowdown would result in lower demand for oil, hence the reason for recent bearishness in crude oil.

Trade war tensions continue to weigh on oil markets as the tariff war between the US and China drags on, with no resolution in sight. For now, both countries look all set to go ahead with their most recent tariff announcements, which could impact their economies in the coming months.

Arslan Butt // Index & Commodity Analyst
Arslan Butt is our Lead Commodities and Indices Analyst. Arslan is a professional market analyst and day trader. He holds an MBA in Behavioral Finance and is working towards his Ph.D. Before joining FX Leaders Arslan served as a senior analyst in a major brokerage firm. Arslan is also an experienced instructor and public speaker.
Related Articles
Crude Oil Price Depressed Below $ 53 - Escalating Coronavirus Weighs!
During Monday's Asian trading session, the WTI crude oil failed to stop its previous session losses and remained depressed around just above
7 hours ago