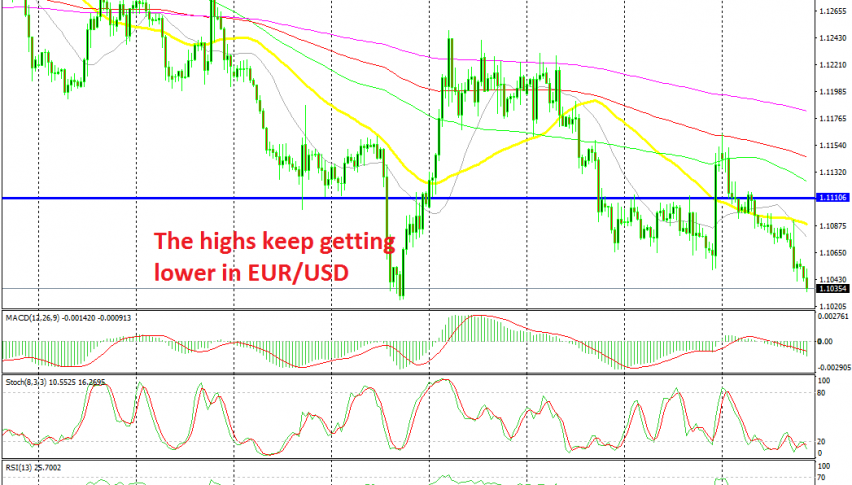 EUR/USD Continues the Long Term Downtrend and Heads for 1.10

1.10 will likely be broken this time

EUR/USD has been trending lower for more than a year now, since the trade war started last year. Moving averages have been pushing this pair down on the daily chart and the price has been making new lows continually, after trading at supports for a period of time.

The last decent support for EUR/USD has been at 1.11 which has been holding on since April. But, that level was broken at the last day of July when Donald Trump announced new tariffs on China. The price has moved above and below that level a few times so that level has lost importance now.

The next level now is 1.10 which is a major round level and therefore a psychological level as well. This pair fell to 1.1020s, which is pretty close to 1.10. Yesterday we saw a small spike higher after comments from ECB member Knot that a QE programme from the ECB is not necessary right now. But we know that the ECB will introduce another stimulus package.

The climb stopped right at the 50 SMA (yellow) on the H4 chart and it reversed back down. So, the pressure remains to the downside and I expect a break of 1.10 soon. Then when the ECB announces the stimulus package, the decline will pick up pace. We will be short on EUR/USD, so we will try to pick the tops on pullbacks higher.