The Spillover in EUR/USD Stretches Further to the Downside, Breaking Below 1.10 Again - Forex News by FX Leaders 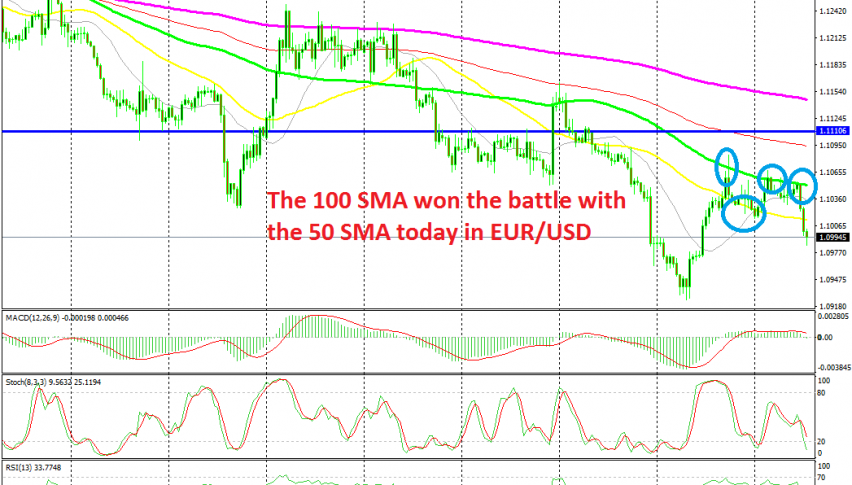 The Spillover in EUR/USD Stretches Further to the Downside, Breaking Below 1.10 Again

The sellers won the battle again

As we have mentioned a few times recently, EUR/USD was quite bullish last week as the sentiment improved in financial markets. But, the climb stopped right at the 100 SMA (green) on the H4 time-frame chart. The sellers tried to come back after the 100 SMA rejected the price last Friday, but they weren’t able to break the 50 SMA.

The 50 SMA turned into support for the last several days. Since last Friday, this pair has bounced between these two moving averages on the H4 chart. The risk sentiment has remained on this week, with commodity currencies still crawling higher and EUR/USD has been banging on the 100 SMA.

But the 100 SMA did’t let go, despite being pierced a few times which don’t count as breaks. Earlier today, the price reversed back down after failing to break the 100 SMA in the Asian session. The 50 SMA had to let go this time and EUR/USD dived below 1.10 again. Tomorrow we have the ECB meeting, with all options open, so it seems that traders are closing their buy positions before the meeting starts.

Bitcoin Getting Ready for the Next Bullish Leg, as MAs Keep Holding as Support
8 hours ago