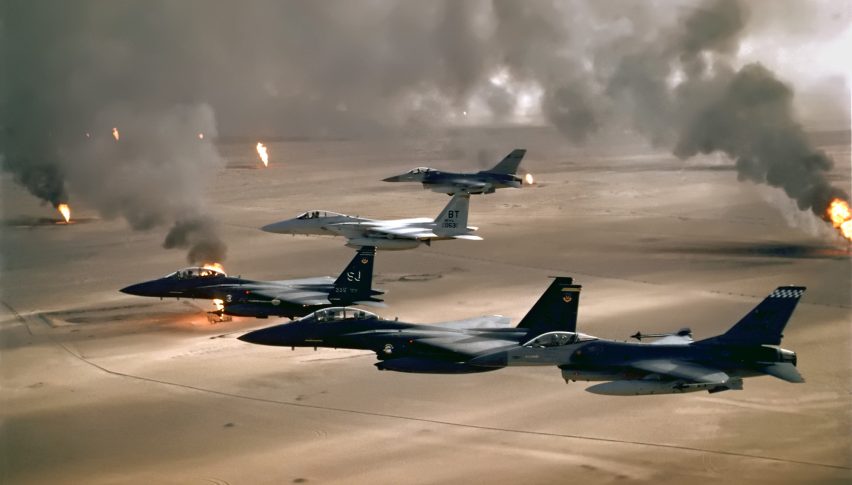 Oil talks have been the highlight of the day today. Over the weekend, there was an attack on a Saudi oil processing facility at Abqaiq and the nearby Khurais oil field. That has reduced 5.7 million barrels of daily crude production, or 50% of the Saudi Arabia’s oil output. As a result, crude Oil prices surged when markets opened, with WTI crude jumping close to $63. The US already came to the conclusion that Iran was the attacker. Donald Trump responded that the US is locked and loaded, depending on the verification of the attack. Although, markets are not buying into the attack scenario, as safe havens remain unmoved after the small bullish gap overnight.

Oil retreated lower during the Asian and early European sessions on comments from Saudi officials that they could restore the production and refining capacity pretty fast, while OPEC+ eased fears of the global supply disruption. But, markets are not buying into it either. Recent reports show that Saudis might not be able to recuperate the refining and production capacities so fast and we might see a prolonged disruption. So, crude Oil has turned bullish again in the last few hours. The tensions in the Middle East have hurt the sentiment in financial markets also, as risk assets keep sliding lower, although safe havens are not taking advantage of it,which seems a bit weird.

The trend remains bearish for EUR/GBP

EUR/GBP has turned pretty bearish for several weeks, since early August. The GBP is benefiting from the Brexit delay attempts from the UK opposition, while the Euro has turned bearish as the Eurozone economy keeps deteriorating and the ECB turns increasingly dovish. Today’s comments from ECB’s Stournaras that Lagarde will be a dove like Draghi have turned the Euro even more bearish and we expect this pair to remain so for the next few sessions.

Crude Oil is not as massively bullish right now as it was early this morning, but the pressure remains to the upside, still. The US is insisting that Iran launched the attacks on Saudi Oil production facilities, so it seems like more tensions are brewing up in the Middle East. If tensions escalate, then the risk is going to get damaged again in financial markets and safe havens will start receiving strong bids again after the two week pause.

USD Rallies Ahead Of The Fed Announcements
9 mins ago